On Monday the 12th of May, at 7AM, approximately 350 Israeli  soldiers, two buses, and several military jeeps arrived at the remote village of Khirbet al-Taweel and ordered the inhabitants of two houses to remove all furniture in order to proceed with their illegal demolition. Previously the IRC (International Red Crescent) had aided the village providing tents as temporary shelter. However, two tents were ultimately seized and one destroyed that morning. The owner of one of the houses apparently offered the soldiers tea saying, “You may take away my house, but you can’t take away my hospitality”.

Currently the villagers are planning to establish a temporary camp 200 meters away from the previous demolitions as under Israeli law this requires a new demolition order to be enacted. Some of the buildings are historical landmarks under Israeli Law; however any renovations (fixing the roof, adding a toilet) are photographed by the Israeli military in order to ‘justify’ their demolition. 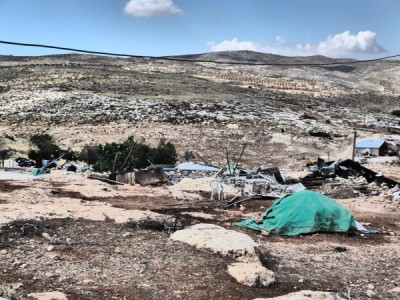 On Tuesday the 29th of April, at 02:00AM, the Israeli army arrived at the small Bedouin village of Khirbet al-Taweel to demolish several structures claiming that they were built without permits. In total, three houses, several animal shelters and the village’s mosque were destroyed. 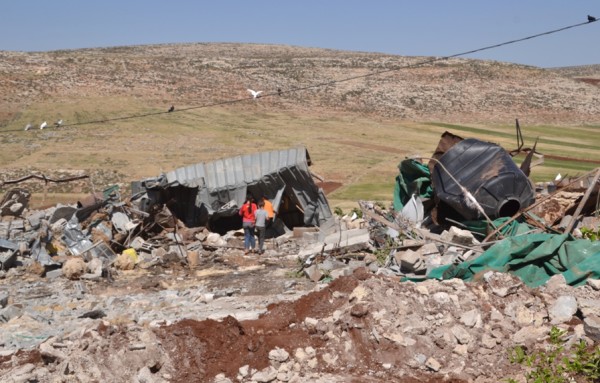 Khirbet al-Taweel has an approximate population of 180 inhabitants. 30 of them are now without homes because of the demolitions, 17 of which are children; the youngest child is only one-year old.

Three families were forced out of their homes at gunpoint at 02.00AM. They had no time to collect their belongings and were only able to take the most necessary items before the demolitions started. The Israeli army took two hours to carry out the demolitions, until 04:00AM, destroying three houses and the village mosque, which was built in 2008.

The three families also lost their water tanks to the demolitions carried out by the Israeli army. In order to get drinking water, they now have to walk 30 minutes uphill to get to the nearest town (Aqraba), and then back.

During the day, the Red Crescent provided the families with some tents. However according to one of the women who were evicted, the Israeli army told them that they were not allowed to stay in the area and had to leave immediately.

The woman stated that: “We have nowhere to go. This is our land, our homes. Where should we go?”

During the past five years, Khirbet al-Taweel has had many demolitions. According to several local villagers, this is a strategy from the Israeli authorities to force local populations to move, and thus expand the illegal farming settlements, located on the other side of the mountain from Khirbet al-Taweel.