Shelter and water tank demolished in the village of Tawayel

Today, 20th of November, the Israeli army entered Tawayel, a village next to Aqraba, south of Nablus, to demolish a well and a shelter belonging to two families.

At approximately 6:00 in the morning, for the third time this year, around 30 soldiers arrived with seven military jeeps and three bulldozers to further demolish this side of the village where families have been living and farming the land for more than 200 years. These demolitions come just three weeks after the same family was victim to the destruction of another water tank and sheep shelter.

The families, with help from the municipalities in Aqraba, have attempted to challenge the demolition orders in the Israeli court several times since 2009 without success. The only exception was when the Israeli army wanted to destroy the electricity system which was funded by the Belgian government. With the diplomatic pressure of the Belgium consulate in Jerusalem, the electricity network was allowed to stay.

The demolition of the water tank today will prevent the harvest of vegetables; the major source of income for the family who built the tank ten years ago. Their income is now restricted to their sheep, which used to drink water from the now demolished water tank. The rain season, which usually starts in November, is late this year, it will hopefully begin soon but the wells will not be filled. The destruction of the shelter leaves the sheep and goats without a safe place during the winter months.

The homes and agricultural structures that the families currently use in Tawayel need reconstructing, and in order to do this the farmers sent several applications for planning permission, they did not receive a response from the Israeli government and this is why the administration declared those constructions as illegal. To this date the Israeli government has not approved any plans for refurbishment in Tawayel and therefore it is most likely that the families cannot build new water tanks and shelters without repeated demolitions.

Home demolitions in this village are strategic. Tawayel is located adjacent to the Jordan Valley in Area C where the soil is very fertile, provided that the farmers have access to water. Israel has many so called “economical settlements” in the Jordan Valley which produce vegetables and fruits for export, and these continue to expand, encroaching on Palestinian land.

According to international laws and the Geneva Convention, these settlements are illegal, but European countries still import products from these settlements. This summer the European Union issued guidelines to restrict commercial relations with Israeli settlements, it has yet to be seen whether this will have any impact. 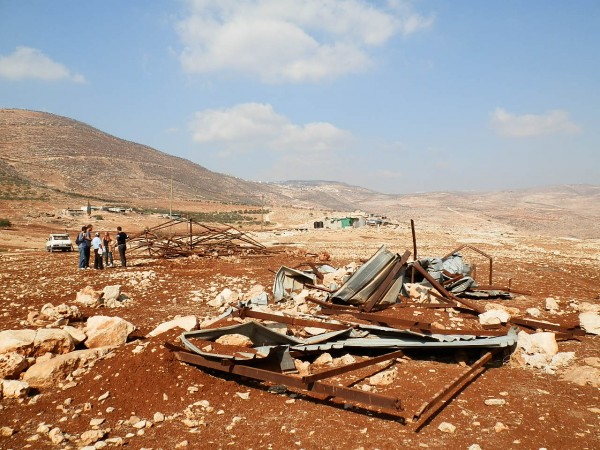