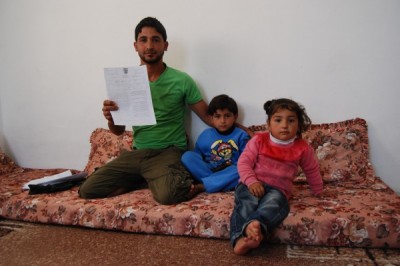 After just three weeks in their new home, the Slemiah family from the village of Idhna have received a demolition order from the Israeli army. The newly built house is on land which has been owned by the family for centuries, and the family has now been forced to pay large sums of money to organise many legal documents for the upcoming court hearing.

Wesam Slemiah (28), Ansar (22) and the children Line (2) and Laith (4) live in the outskirts of the city of Idhna, west of Hebron in the West Bank. Wesam borrowed money from his cousin to be able to build the house, and the land he was buliding on has been owned by his family for many years. Shortly after moving in, they received a demolition order from the Israeli army saying that the land did not belong to them. This is something that also has happened to many of their neighbors in the past six years.

In order to prove ownership of the land, the family has had to pay large sums of money to different authorities. Altogether, the costs exceed one month of income for the family. They now have all the papers necessary to prove their ownership, and on 24th April their documents will be taken to a court for further decisions.

During the last six years, two houses in the area have been demolished. The families usually have to pay the charges for the bulldozer to destroy their homes. If they do not have the money, Israeli forces confiscate their ID’s to force them to pay. This has happened to a neighboring family to the Slemiah family, their house has been demolished twice. Partly with money from the UN, that family managed to rebuild their house, a project which ISM took part of, and today their third house is still standing.

As well as demolitions orders that are extremely costly when the case goes to court, many structures used to house sheep and other animals have also been demolished by the Israeli military.  Residents in the area also speak of night raids from the Israeli army, and reoccurring harassments that are making everyday life extremely difficuly. The house raids have been occuring in the village since the start of the First Intifada [1987].

Wesam has been forced to stay home from his job since the demolition order arrived. The Slemiah family is worried about what will happen to their new home, and are frightened that the Israeli army could arrive at any moment.  When an ISM activist asked Wesam and Ansar what they think of their future, they answered: “There’s an occupation here, what can we do?”.