Pesach, or Passover, started Monday 14th April and is a seven day long holiday where many zionist tourists and settlers from illegal settlements travel to al-Khalil (Hebron). Increased violence and attacks towards Palestinians occurs during many Jewish holidays. During the holiday, entry into historic Palestine (the current state of Israeli) is completely closed to Palestinians, even those with the correct permits.

Restriction of movement is also inflicted on the Palestinians living within al-Khalil itself, as checkpoints and many local shops are forced to close, while settlers and Zionist tourists go on ‘tours’ guarded by Israeli soldiers and border police. The amount of tourists in al-Khalil during these seven days is estimated to be approximately 7000 people.

Yesterday afternoon, Israeli forces closed the main road in the center of al-Khalil, in order to allow settlers access to the Tomb of Othniel Ben Knaz, which is located in H1. Thousands of Hebronites were hugely disrupted as the major Palestinian access road was blocked by a mobile barrier and then occupied by hundreds of Israeli soldiers.

Many Palestinians in the recent days have expressed anxiety over the escalating violence during the holiday. In al-Khalil there is normally one “settler tour” every Saturday, when settlers from the illegal settlements enter the souq (market) accompanied by soldiers. During the tours they often harass the shop owners and Palestinian souq visitors. During Pesach, and particularly today, Thursday the 17th, many groups of tourists and settlers have toured through the market.

The checkpoint between the souq and the mosque has been closed since yesterday morning, stopping the Muslim population from entering the mosque. The closing of the checkpoint also means that local children are forced to walk a much longer path to school.

The school children in al-Khalil have suffered this holiday in several ways. Due to the increased military presence of Israeli soldiers, schools have finished earlier, although the children have still been forced to pass through large groups of soldiers while leaving and entering their schools. This morning ISM witnessed children forming ‘chains’ to avoid being split up while passing the soldiers. One teacher from a local primary school stated that only 25% of the pupils has been present in school today. An ISMer noted: “We see the kids walk through these checkpoints every day, but it is obvious that they have been even more scared these past days. 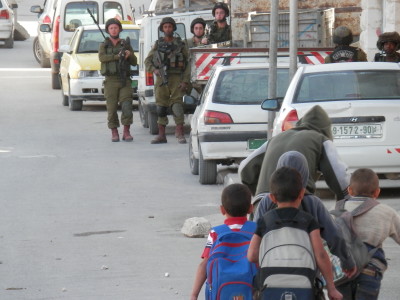 Israeli soldiers close to a school in Hebron (photo by ISM)

In addition to Pesach today it is also Prisoners Day, which has been highlighted with demonstrations all across the West Bank. In al-Khalil, families was gathering outside the stadium to pray for their imprisoned loved ones. Many had brought pictures of their family members and friends, and the people of al-Khalil, together with many organisations and political parties, was there to show their support for the prisoners. An ISMer at the demo said: “There was a lot of different speakers, drums and music, and I think the participants in the demonstration shows how Palestinians unite in solidarity for the prisoners.” 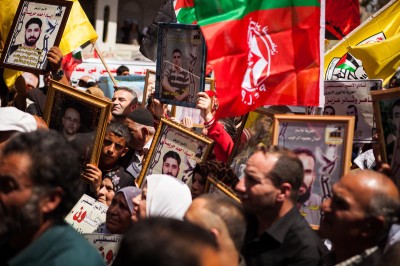 In recent days, stun grenades have been echoing through the city, accompanied by rubber-coated steel bullets and much tear gas. For the past three days, clashes have broken out between Palestinian youths and the Israeli army, with young Palestinians throwing stones, while the Israeli military fires their weapons. At the moment ISM has no exact information about how many people were injured in the clashes, but today an ISMer was informed by a participant in the clashes that rubber-coated steel bullets injured five young people today.