The Israeli military oppression of Palestinians living in the Jordan Valley can take many forms, including the systematic confiscation of essential tools and materials, to physical punishment and arrest.

The latest act of harassment by the Israeli army in the Jordan Valley took place five days ago in the Al Maleh area, where 26 water tanks were confiscated, depriving the local population access to their water supply. To reclaim the stolen water tanks, the Local Council has been forced to pay 5,000 shekels (over 1,000 euros) to the DCO (District Coordination Office). However the tanks will not be returned for a further 10 days, even after the payment has been completed.

Arif Daraghmeh, local councillor of the area, reports that in the early 1990s, the Israeli army built infrastructures diverting the natural course of the water, and that these actions might be the direct cause of several springs drying up in the region. This is just another case of deliberate harassment that ISM has previously reported.

Other acts of harassment include physical punishment, demolition of tents and constant intimidation by the Israeli army. Arif Daraghmeh reports that he was recently forced to stand for nearly two hours under the sun in a nearby checkpoint.

The Al Maleh area is only populated with nylon tents and minor buildings, generally for cattle. The council has been trying to build a school in the area in recent years, but has not succeeded yet. According to Arif Daraghmeh, there are approximately 300 children that go to school in nearby towns by bus, however this bus has only been available in the last two years. Previously the children had to walk long distances to school.

The presence of the Israeli army and settlers from nearby illegal settlers are very common in the Al Maleh area. The Jordan Valley is considered to be Area C (under full Israeli civil and security control), as well as a military buffer zone with neighbouring Jordan. Military training, therefore, takes place in Al Maleh on a regular basis and trainings in an area with a civil population often have a high price. Since 2011, two people have died and 11 have been injured due to explosives left behind from military training. The most recent injury was five months ago; a Palestinian famer lost three fingers on one of his hands.

The Local Council has contacted other authorities, including a member of the Knesset (Israeli Parliament), to discuss the situation. Other contacts have been made with OCHA (Office for the Coordination of Humanitarian Affairs, United Nations) as well as the Red Cross; the latter in relation to the explosives frequently left in the area. It is noteworthy that such behaviour by the Israeli army goes against the Protocol (II) on Prohibitions or Restrictions on the Use of Mines, Booby-Traps and Other Devices (Geneva, 10 October 1980). Article 3 clearly states that the use of conventional weapons, such as mines, can only be directed against military targets. No incidental loss of civilian life, or damage, is allowed. The Israeli state ratified this Protocol in 1995.

None of the above organisations have managed to improve the situation, and the water issue continues to be an urgent problem today. 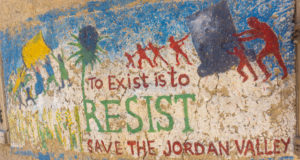