The Israeli occupation in Palestine can be seen in many different ways.

In the Al Maleh area of the Jordan Valley (area C, which is under full Israeli military control) 450 Palestinian families, including 100 Bedouin families are spread through 13 villages. All of them live in tents and have no running water or electricity.

When international activists visited the stolen land yesterday, the site was already under construction, possibly to build a new illegal settlement or an extension of a military base.

The Israeli military bases in the Al Maleh area are responsible for many crimes against the Palestinian villagers. Two years ago, two young people, aged 18 and 20-years-old respectively, were assassinated during a “training” session.

The “training” is regularly used to justify demolitions of homes, destroying livelihoods and families in the process. Currently, there are 275 active demolition orders and 750 Palestinian structures that have been destroyed and forced to rebuild in the last year.

It is clear that living in Al Maleh is a daily struggle. In this part of the Jordan valley, agricultural working is the main source of income. However the lack of water, caused by Israeli government polices, continually hinders this way of life. For instance, 33-years-ago in Hamamat al Maleh village, the Israeli government poured concrete into the ground in order to cut off access to a natural spring access. This injustice continues to affect the village every day.

In many villages cultivating livestock is the main income, however the Israeli military can and does claim “security reasons” and confiscates some of these vital animals. Confiscated animals are then held in a structure in Jericho. 3000 shekels is the normal fine Palestinian farmers must to pay in order to have their cow returned.

It seems evident that in Al Maleh, the Israeli military seeks to make life as difficult as possible for the Palestinian villagers living in the area. Israeli forces have not been held accountable for the crimes they have committed and it is clear that these offences will continue while the international community stays silent about the daily injustices being carried out in the Jordan Valley 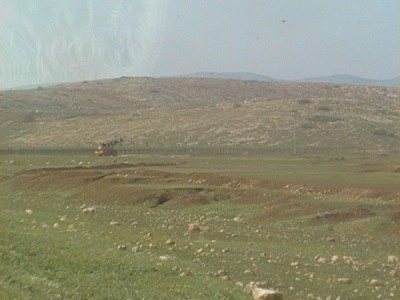 The confiscated land where construction has already begun (photo by ISM).