In the last month, the Israeli army has arrested 10 boys under the age of 16 from Osarin village. As of today, they all remain in the prison.

This is the latest in a long line of tactics employed by the Israeli military to intimidate the people of Osarin the surrounding villages. According to a member of the village’s local council, the Israeli army approached the village around six months ago demanding that Osarin and three other neighboring villages sell three dunams (3,000 square meters) of land to the Israeli government. The threat was that if they did not comply the army would simply take the land. Despite this pressure, the people of the village collectively chose to refuse and have had to live with the consequences of this choice ever since.

The land the army asked for originally was intended to build three watchtowers, one of which would be just outside Osarin. The other two would be near the villages of Yatma and Qabalan, who also had demands from the Israeli army to sell their land. In total the army was trying to obtain 320 dunams of important farmland, containing olive trees, other crops and grazing areas from the three villages.

The village’s decision to refuse was met with a new plan by the army to build a wall on either side of the main road (route 505), running adjacent to the village, all the way to Za’tara checkpoint. This would be roughly 10km in length and would unsurprisingly require the confiscation of land on either side of the road, which belongs to the village of Osarin. The reasoning for this intrusion into Palestinian land was allegations that boys from the village had been throwing stones onto the main road, where settlers from the illegal settlements pass by in their cars and sometimes on foot. In fact, the Israeli army used these allegations to call a meeting with four villages, one of which was Osarin, the others being Beita, Beit Furik and Madama. In this meeting the army told the representatives from the villages that unless the alleged stone throwing ceased they would make all four of the villages into closed military zones. In other words, force out the inhabitants of all four villages and make it impossible for them to return.

While the Israeli army demands that children stop throwing stones, they are also at the same time increasing attacks on the civilian population of Osarin. During these periods physical force has been used, including punching individuals with no just cause and firing live ammunition into the air to intimidate the local population. Also during these incursions, the roads are closed around the village even when ambulances need to either enter or leave the village, endangering lives in the process.

The village has attempted to go through the court system to block the Israeli authorities’ plans for the area, but have lost each court battle numerous times. This is despite the fact that the village is located in Area B (Palestine Authority and Israeli control) and therefore any seizure of land, including for the purposes of military building construction, is illegal. The area has long been an area of high activity for the Israeli military, where in November 2013 witnesses report that military training took place involved up to 1,000 Israeli soldiers. During the weeklong action villagers were told to stay in at night, creating a curfew, and at times local groups of boys were used to provide training with how to deal with stone throwing.

When a local representative was asked if he felt matters had gotten worse in terms of Israeli military interference and intimidation, his answer was an unequivocal yes. The construction of the wall along either side of Route 505 has yet to begin but will most probably commence in the near future. In the meantime, arrests of children and physical violence towards the villagers continue. 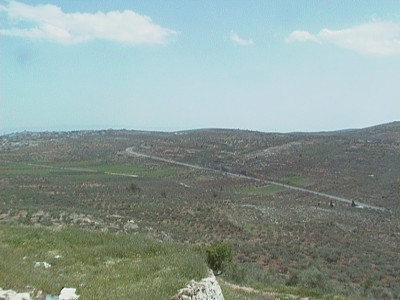 Photograph of Route 505 where the wall will be built (photo by ISM).