The neighborhood of Salaymeh next to Salaymeh checkpoint (160) has been the center of tensions between Palestinians and the Israelis in the city of Al-Khalil (Hebron). This checkpoint cuts off an already poor and struggling neighborhood from the rest of the city. At these checkpoints that are throughout Hebron, Palestinians are stopped, delayed, searched, asked for ID and sometimes denied passage. The checkpoints are a daily humiliation and intimidation of the local people by the occupying Israeli army.

The checkpoint at Salaymeh is also used every day by children on their way to and from school who are subject to the same treatment by the soldiers. From the moment the children start looking like teenagers, they go from being treated like children to being treated as criminals. In order to cope with this the children, have to learn to handle themselves as adults from a very early age, and as a result they are forced to grow up far too quickly.

In the past week 2 children have been abducted and illegally detained by soldiers in Salaymeh. Both of them were 14 years old from Jerusalem and were visiting their cousin in Al-Khalil. The children were dragged from school, frisked, forced on their knees and handcuffed by the soldiers. One of them was let go after 2 hours, the other was taken to a military base, where he was interrogated without his lawyer or parents present.

An international activist who was documenting this incident was also detained by the soldiers, she describes her detention as follows:

I’ve been at Salaymeh checkpoint every other day for a month and a half just trying to document the soldier’s harassment of the children, keeping in contact with the UN, so they can hopefully help if children are arrested. I am always mindful not to antagonize the soldiers and try to interact with them as little as possible. My hope is that an international presence will result in less violence because the soldiers will know they are being watched and may be held accountable.

On the day that I was detained I was filming a soldier as normal, who threatened to arrest another activist who I was with. Because I’d witnessed a lot of broken rules and violence by the army during my time at Salaymeh checkpoint, I knew it was important to keep filming. The commander asked me to move away, and when I kept filming, she told me that she would have another soldier move me with force. When I didn’t stop filming, she told me to come with her and that she had the authority to make arrests. I was very unsure of what to do in this situation – I had been told before that soldiers could not make arrests, but I was confused, and I was afraid of what might happen so I complied and went with her. I later found out that what the commander had said was in fact a lie and that she had absolutely no legal authority to detain me.

I was kept at Salaymeh checkpoint for an hour and a half, being told that the police would come but they never did. I was then put into a military van without being told where I was being taken. They then drove me around the city back and forth for half an hour which was very confusing. I still don’t know why they did this but I believe now that they were trying to shake off the UN who were trying to find out where I was being held in order to assist me. Eventually I was taken to a military base where they were also holding the Palestinian child who had been arrested. We were both held there for over 5 hours. During this time I was marshalled around, sporadically questioned, never given any food or water and never having anything explained to me. I was told that I would never be able to return to the country and that I would be deported that day. The whole time I was denied access to my lawyer and I was never given any reason for why I was being held.

What struck me the most about being detained with the Palestinian child was that as an international I was treated far better. I, an adult, was not handcuffed, and I was allowed to keep my things. He however, a child, was handcuffed, restrained, frisked, and they took his phone and his things. It was shocking and angering to me that this child was treated so much worse than me – it made it very obvious to me that the treatment of Palestinians undoubtedly has its roots in racism. 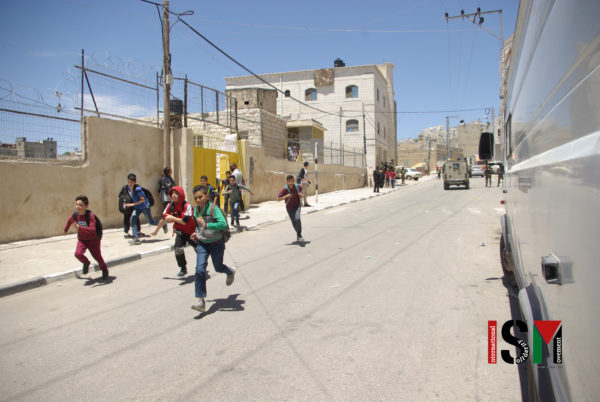 Principal tries to stop soldiers from entering a school