On the morning of February 8, 2014, during a nonviolent action claiming the right of Palestinians to access their own land, a group of settlers from the illegal outpost of Mitzpe Eshtamoa attacked Palestinians, Israeli activists and internationals with stones and sticks, while Israeli soldiers stood by and watched.

At 9:36 a.m. about fifteen Palestinians from the South Hebron Hills village of Shuweika, accompanied by eight Israeli activists and five internationals, went with five flocks to the valley near Mitzpe Eshtamoa to claim their right to access their own fields. When the shepherds arrived in the valley they found a Star of David created with stones and rocks on Palestinian-owned property. Palestinians, Israeli activists and internationals together removed the stones and rocks, cleaning up the field. At 9:59 a.m. a group of settlers appeared from the outpost, looking toward the shepherds and activists. After about half an hour settlers started organizing the attack, even as Israeli soldiers were inside the outpost. 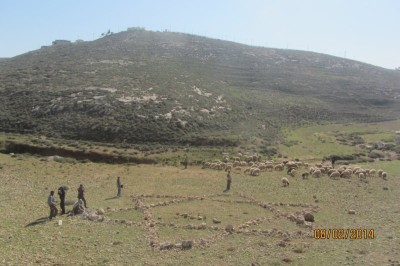 At 10:53 a group of twenty settlers, half of them masked, stormed down the hill and threw stones with slingshots. Israeli soldiers watched the scene without intervening, even when four settlers ran towards an Israeli activist and beat him up. After that the settlers moved to a nearby hill and continued throwing stones. Only at this time did the soldiers unsuccessfully attempt to stop the settlers. Several minutes later the Palestinian landowner arrived in the valley to show his property document to the soldiers. Settlers also threw stones at the landowner, but they didn’t hit him.

No settlers were arrested or detained by soldiers or Israeli police, the latter arriving on the scene at about 12:00 p.m. 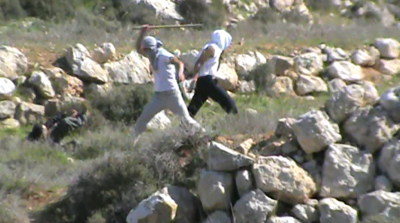 Despite this event, the Palestinians from the village of Shuweika are still strongly committed to accessing their land for everyday farming activities. Operation Dove has maintained an international presence in At-Tuwani and the South Hebron Hills since 2004.