On the afternoon of February 11, Palestinians discovered about eighty olive trees uprooted alongside bypass road 317 near the Susiya junction in the South Hebron Hills. 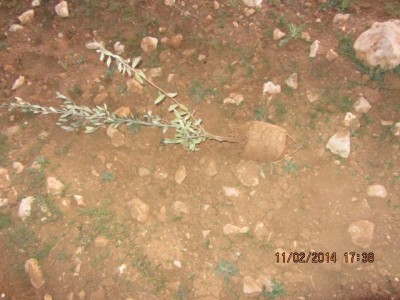 The olive tree grove belongs to the Hushiya family from the nearby town of Yatta and had been planted only three weeks ago. Yesterday afternoon the owners and B’tselem staff members gathered near the destroyed trees, waiting for the police. The Israeli police and District Coordination Office arrived on the scene and documented the incident. Today Operation Dove volunteers and B’tselem staff went there to take more pictures.

This field is part of the area that settlers from the nearby settlement of Susiya illegally occupied during 2007, planting a vineyard. Immediately the Palestinians with the help of Rabbis for Human Rights filed a complaint and started a legal process concerning this land (for more details click here). In 2013 the Israeli High Court ordered the army to dismantle these crops and the order was implemented by force.

The number of Palestinian-owned trees uprooted and damaged in the South Hebron Hills area since the beginning of 2014 has risen to 100. Olive trees are an essential resource for the Palestinian community, and their damage causes serious economic loss.

Nevertheless the Palestinian communities of the South Hebron Hills area are still strongly involved in using nonviolence as a way to resist to the Israeli occupation. Just two days ago twenty-five Palestinians planted sixty new olive trees on their own land close to the illegal Avigayil outpost (for more details clickhere).