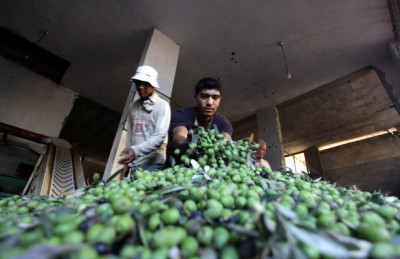 During the recent olive harvest, which lasted from the end of September through October, dozens of Palestinian volunteers joined farmers in their groves near the tense barriers of the Gaza Strip.

The volunteers worked during a week at the height of the harvest season, from 20 to 27 October, in two of the farming districts most often targeted by Israeli forces: Beit Hanoun, around the Erez checkpoint in northern Gaza, and al-Qarara, a town in the Khan Younis area of the southern Gaza Strip.

Along with others near the “buffer zone” separating Gaza from present-day Israel, these areas face regular incursions by Israeli forces, which often send tanks and bulldozers to level farmland. Even more frequent are the bursts of gunfire aimed at farmers or others near the barrier erected by Israel.

These attacks have claimed vast tracts of productive farmland stretching hundreds of meters into the Gaza Strip, converting them to wasteland or fields of low-maintenance crops, most of which are wheat.

Abeer Abu Shawish, project coordinator for the Protection for Better Production campaign — a project of the Arab Center for Agricultural Development — said that more than fifty volunteers joined the effort.

The mobilization involved farmers’ organizations, like the Union of Agricultural Work Committees, and other groups across Gaza.

“Our partner organizations mobilized volunteers to help farmers in the restricted area harvest their olives,” Abu Shawish said. “They’re other farmers, civil society activists, women: all these people joined us this year.”

“We can just plant wheat and wait,” said Abu Jamal Abu Taima, a farmer in the village of Khuzaa outside Khan Younis. “Other crops need to be tended every day.”

Abu Jamal’s 50 dunams (a dunam is equivalent to 1,000 square meters), which he plans to sow with wheat after the November rains begin, once contained olive groves as well as greenhouses for an array of vegetables.

In 2002, Israeli forces began razing Palestinian agricultural areas near the barrier, as well as along the Philadelphi Route by the Gaza Strip’s border with Egypt.

This included the demolition of Abu Jamal’s olive groves and greenhouses, as well as his home. “The Israelis destroyed them with four bulldozers, five huge tanks and three Hummers,” he said.

Since its occupation of the Gaza Strip and West Bank in 1967, Israel has uprooted 800,000 olive trees in those territories, Oxfam reported in 2011. As the graphic design activism initiative Visualizing Palestine recently illustrated, those trees would cover an area33 times the size of New York City’s Central Park.

By 2013, according to the Palestinian ministry of agriculture in Gaza, Israeli forces had leveled “some 20,000 dunams of land areas planted with half a million trees” in the Gaza Strip, contributing to a local deficit in olive oil production of 60 percent (“Israeli crimes against farmers cause 60 percent deficit in olive production,” Palestine News Network, 24 September 2013).

In the West Bank, the destruction of olive trees by both Israeli settlers and occupation forces continues. Stop the Wall and the Palestinian Farmers’ Union have organized an accompaniment project there, the You Are Not Alone campaign. By 8 November, its volunteers had documented the burning and uprooting of 1,905 olive trees by settlers during this harvest season alone.

A report by Stop the Wall states that its list of attacks does not “pretend to be complete.” Among the problems encountered by farmers trying to reach their olive trees are “settlers pump[ing] toxic sewage water on agricultural land” (“Settlers burn and uproot 1,905 olive trees during the harvest season,” 8 November 2013).

The Israeli human rights organization Yesh Din has reported that Israeli occupation police “overwhelmingly failed to investigate the incidents and prosecute offenders,” noting that of 211 investigations actually opened between 2005 and June 2013, only four produced indictments (“97.4 percent of investigative files relating to damage of Palestinian olive trees are closed due to police failings,” 21 October 2013).

“We are still here”

But the destruction of olive trees in the Gaza Strip is largely complete. For years Israel has used armored Caterpillar D9 bulldozers, accompanied by tanks, to clear away olive trees in the “buffer zone.” Farmers in the area, who face the constant threats of both gunfire and leveling of land, have little reason to plant any crop needing regular attention or significant resources, much less crops that require years of careful cultivation and maintenance.

“I want to plant more olive trees, and other things, but cannot,” Abu Taima said. “For now, I plant wheat.”

With exceptions — most notably a 28 October airstrike on an olive grove near Soudanya in the north of Gaza — the Strip’s olive harvest passed more quietly than most agricultural activities in the territory.

“We try to bring international attention to the farmers and discourage Israeli attacks on them,” the Protection for Better Production campaign’s Abu Shawish said. “By supporting them, we encourage them to access their lands and keep using them. It shows the Israelis we are still here, and we can access our lands without any fears. Farmers in the restricted area can resist the occupation by existing on their own lands.”

The Arab Center for Agricultural Development’s programs for farmers do not end with accompaniment, Abu Shawish explained. The organization has conducted intensive leadership training for 100 farmers from the Gaza Strip’s five governorates, in farmers’ rights as well as skills like public advocacy. It has also held awareness-raising workshops for 500 more farmers.

“We are interested in building a social movement for farmers in Gaza,” she said.

The workshops also aim to build popular support for boycotts of Israeli products and the purchase of Palestinian goods among farmers.

“These workshops are about how to encourage farmers themselves to be involved in the boycott campaign, and how they can help the national economy by boycotting Israeli agriculture,” Abu Shawish said.

“We try to encourage farmers to boycott Israeli agricultural goods and buy Palestinian products to support the local economy. It’s raising awareness. At the same time, it’s about getting farmers involved in the campaign itself.”

Abu Taima, too, has a path of resistance.

“For us, the land is something very important,” he said. “We cannot just leave it. We will not have another 1948. We will not leave our lands again.”