Today, Friday 6th September, Mohammed Breijeh was arrested during a completely non-violent and peaceful demonstration in the village of Al-Masara. Mohammed will be held until next Wednesday, where a military court will decide whether to release, or to sentence him for taking part in today’s peaceful demonstration. 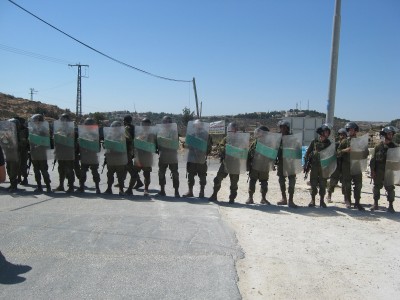 Soldiers blocked residents from reaching their own land (Photo by ISM)

The protest consisted of approximately 40 people, a mixture of Palestinian, Israeli and international activists, walking through Al-Masara in order to reach the villagers’ land which is located just below Efrata settlement. Mohammed was arrested shortly after the protest began for no apparent reason. When activists confronted the soldiers about his arrest, they were unwilling to give any explanation, many standing in silence, with others positively ignoring the question. Mohammed was taken to Kiryat Arba police station and more information will be available from Wednesday.

The army’s response to the regular Friday demonstrations in Al-Masara is very revealing of the general attitude the Israeli forces have towards Palestinian descent. The speed at which the demonstrators are arrested, and in many cases, the use of unnecessary and disproportionate force when conducting these arrests, is typical. Many of the regular demonstrators at Al-Masara have been previously arrested numerous times in a similar manner. The army has consistently used this tactic of immediate arrests to break up the peaceful demonstrations Al-Masara is known for. A prime example of this tactic in action was seen last month on 16/08/2013, where the army violently arrested Palestinians and internationals including journalists, no more than five minutes after the demonstration started.

Since 2006 Al-Marara has been holding weekly demonstrations that began in protest against the apartheid wall which illegally annexed a portion of the village’s land. Over the years the demonstration has evolved to focus on a number of issues, themes of Palestinian struggle such as erecting tents on annexed land and symbolising the right of return in this manner, with the demonstration today highlighting the plight of Palestinian prisoners in Israeli jails. The population of Al-Masara is approximately 1000 people. A small village when compared to some of its neighbouring villages and towns. Nevertheless, its residents show no sign of giving up their struggle, or changing its non-violent nature. Unfortunately, Israeli forces have made their response to this village’s peaceful demonstrations consistently clear: Palestinian descent to occupation will not be tolerated.