On the 16th August 2013, Israeli occupation forces blockaded the village of Beita, near Nablus, stopping movement in or out. They proceeded to spend the hours of 10am to 7pm attacking the village with teargas, rubber-coated steel bullets and sound grenades. One fourteen-year-old boy was injured with a rubber bullet to the leg and three others were arrested. Their current legal status is unknown. 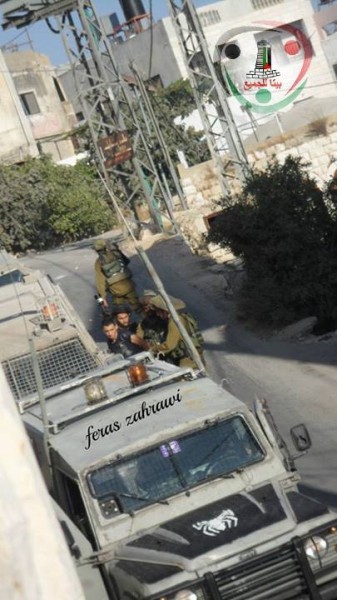 At around 10am, around eleven jeeps arrived in the area, proceeding to completely surround the village of Beita. Several jeeps blocked each access road to the village, completely restricting freedom of movement. Soldiers in military vehicles then drove into the village, the residents of which were now completely trapped. Storming through the village soldiers shot teargas and sound bombs, some of which were seemingly deliberately fired directly into homes. Some youth emerged from their homes to defend their families and the town from the Israeli military incursion. Others watched from the roofs of their homes, as the teargas fell down on their village.

Nineteen-year-old Abdel Aziz was working in his father’s shop during the incursion, but closed the doors when the army approached the area. Going up onto the roof, he watched as the teargas fell in the village. Around seven soldiers, having seen him on the roof, came to the front door and started banging at it. When Abdel Aziz came to the door, they pushed him inside and immediately started to beat him. He was then dragged outside and searched violently at the jeep. His father and brother, who witnessed the arrest, said that he was then hit in the head and brutally pushed into a jeep, where he was blindfolded and handcuffed. Abdel Aziz is due to start studying law at university in less than two weeks time on the 1st of September. However, his family are concerned that he will not be released in time to begin his course. His father said today “his mother is the most concerned – she is very upset”.

Twenty-year-old Amar Yousef was assisting in the preparation of a family wedding at his grandmother’s home when the soldiers stormed the village. Amar initially sought cover before he witnessed a fourteen-year-old receive a rubber-coated steel bullet to the leg. Leaving the safety of the house, he tried to assist this young boy with his injury. However, he was observed by a group of soldiers and subsequently beaten and arrested. At the age of sixteen Amar was imprisoned for two years, currently he has been attempting to find employment and has found this to be extremely difficult due to unemployment levels in the surrounding area.

A third young man, Mazen Dweikat was also arrested under similar circumstances. After contacting the Palestinian/Israeli military liasion, some of the families were informed that their arrested sons are in Huwwara military base, but that they will not be able to have any legal representation for at least three weeks. The fourteen-year-old who was shot with a rubber-coated steel bullet was unable to be treated at a hospital in Nablus because exits from the town were still blocked; instead he was treated by a local doctor in Beita.

Beita is not unaccustomed to assaults from the Israeli military, during Ramadan the village was subjected to a night invasion where teargas was fired. There were no arrests or injuries in this last attack, therefore it seems that as the “peace talks” begin, the situation is escalating; a fact confirmed by the army invading the village once again the next day, 17th August, shooting gas at residents.