A word of caution from settlers to internationals in Hebron

On the evening of Thursday, 6 June 2013, a fellow activist and I were walking home from an innocent venture to get a refrigerator door in the Prayers’ Road area of the H2 area of Hebron.  My companion saw out of the corner of her eye one Palestinian youth throw one rock at one settler car, then scuttle away before anyone could approach him.  The settler got out of his car and ran to the nearest checkpoint and gave a description of the Palestinian to the soldiers there.  Almost immediately, seven Jeeps full of soldiers arrived on the scene, and we followed a group of soldiers as they dispersed over the area, stopping at every Palestinian home to ask for ID cards and whether there were any shebab (Palestinian youth) in the house.  We then returned to the place the soldiers dispersed from and watched in case there were any arrests.  Fortunately, to our knowledge, there weren’t any, but the soldiers stayed for hours talking to settlers, including a woman we know to be particularly extreme.  At one point my companion approached the soldiers conversing with this settler woman and, as I followed suit, the woman tried to get behind me and stop me from walking, as if she wanted to assault me.  I kept on walking as if nothing had happened as my companion pulled me away from the settler woman. The soldiers made no response. 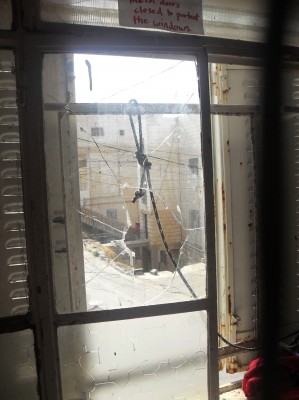 We continued down Shuhadah Street to go home, figuring the Souq (marketplace) would be closed down at this late hour; it was well after sunset.  We were approached by a group of teenage girls on bicycles, who I misjudged to be Palestinian because most of the settlers here are Caucasian.  They asked me if I was Muslim and where I was from; I was nervous because of the hour and in hindsight, I didn’t notice that they were talking to each other in Hebrew and dressed in a way more common for settlers than Palestinians (mid-length sleeves and skirts).  Then one of them ran up behind me trying to grab me and my companion came in front of her, warned her not to touch us and pulled me away from the attacking settlers.  We detoured up the path Palestinians take to exit Shuhadah Street before the checkpoint and a soldier ran after us with the attacking settlers at his heels.  He was yelling at us in rapid Hebrew interspersed with “Passport, passport!” His use of Hebrew, even though we were clearly internationals, seemed meant to confuse and delay us.  My companion yelled “But this lot are giving us trouble!” and the soldier was undeterred.  She finally argued that we had shown our passports at the last checkpoint and he let us continue.

The settler girls followed us home via Shuhadah Street and, as we passed through Checkpoint 56, they gathered around our house.  We later found that the women’s bedroom window in our house had been partially shattered, with a hole in what remained of the window and a rock sitting on the floor. A word of caution to internationals – especially those who, like me, are clearly Muslim – if you travel home via Shuhadah Street after dark.