Human rights activist Jawad Abu Eysheh, 39, was arrested Friday 7th June following a complaint he made four months ago about a settler attack.

At 4:20 pm on 7th June, Israeli Police arrived at the house of the Hebron organisation Youth Against Settlements and demanded to see the ID’s of Jawad and three other men present. The police then told Jawad that they wanted to take him away ‘for investigation’, and called the Israeli military to escort Jawad away in handcuffs. 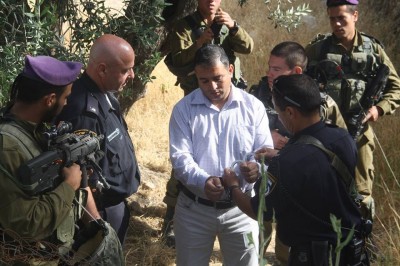 Jawad was then paraded through the adjacent illegal Tel Rumeida settlement and taken to the nearby checkpoint 56, before being transferred to the police station in the settlement of Givat Ha’avot outside the city centre.

The line of questioning from the police made clear that Jawad was being detained as a result of events that happened back in February, when Jawad and other activists were attacked by American-born extremist Baruch Marzel and other settlers.

Despite being a victim of that violent assault in February, it was Jawad who was subjected to arrest today, not the perpetrators. During his detention, Jawad was also forced to submit a DNA sample against his will, and to sign conditions that he will not speak with Baruch Marzel for the next 30 days. Jawad stated he is happy to comply with this stipulation at least. Jawad was released at around 9pm.As well as today’s arrest, Jawad has faced other harassment recently, including not being allowed to walk on the street where his factory space and uncle’s house are located.

The Israeli army and police in Hebron have a long history of harassing human rights defenders such as Jawad and his colleague Issa Amro, and of following the wishes of extremist settlers when deciding who to harass.