There are growing concerns for the safety of non-violent Palestinian activist and organiser Issa Amro, following a recent letter to Israeli security forces from Israeli settlers of Hebron, accusing Amro of terrorism and incitement, and warning that a failure of the Israeli authorities to remove him “could be costly”, and threatening “bloodshed”. This is the latest in a long line of threats and attacks against UN human rights award winner Amro. 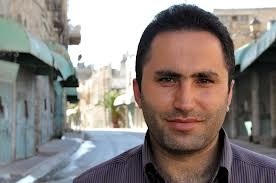 In the letter, the mayor of the Jewish “Hebron Municipal Council” and the director general of the “Hebron Jewish Community” insist that army commanders “use administrative detention until you are able to find a long-term solution to completely end this hostile and dangerous activity” referring to Amro’s extensive work with various human rights groups. The full letter can be read here.

Amro has been violently attacked by this same community of Israeli settlers many times in the past – his nose and wrist have been broken and he received five stitches to his head. He and his family regularly receive death threats from the settlers of Hebron over the phone, continuing their campaign of threats and violence against him.

Despite having received numerous death threats and abuse from settlers over a period of many years, Amro is particularly concerned about the letter of the 20th March, because of the status and influence of its authors. Various Zionist websites have since issued calls for his execution, publishing various pictures of his face marked by red circles. Despite Amro’s long dedication to non-violent principles he is constantly identified as a terrorist by these websites.

You can see examples of this here :

Amro states “I have been arrested and detained on too many occasions to count, but I have never been charged with anything.” He says that he is regularly abducted by soldiers from his home, blindfolded and driven around for several hours before being left back at his house. On other occasions, he has been beaten by soldiers who have threatened to kill him and his family. During his most recent arrest in March 2013, Amro was stripped naked and made to stand outside for three hours.

On the 27th of March 2013 there was an arson attempt against the Youth Against Settlements community centre in Tel Rumeida – Amro was verbally abused and humiliated by police officers when he attempted to file a complaint and was ejected from their office twice before the complaint was filed. There has yet to be any investigation by the police.

Issa Amro has been involved in founding many non-violent organisations in Hebron, working peacefully against the occupation. This includes the Hebron branch of the International Solidarity Movement (ISM), the Arab Non-Violence Network, Youth Against Settlements and the Hebron Defenders. He won the One World media award in 2009 for his involvement B’tselem’s “Shooting Back” project, which provides media training and distributes cameras to Palestinians to document settler and military abuse for Palestinians. Amro’s work with these organisations, as well as numerous other projects intending to document and non-violently resist human rights abuses and expansion of illegal Israeli settlements led to his winning of the UN OHCHR ‘Human Rights Defender of the Year in Palestine’ award in 2010.