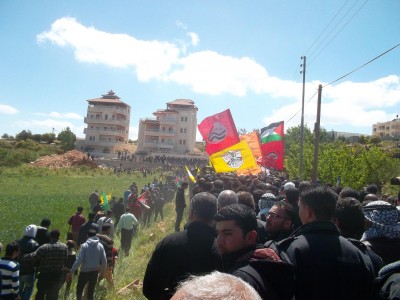 Tens of thousands of people arrived into Hebron on the 4th April to honour martyr Maysara Abu Hamdiyeh, who died of cancer in Israeli custody after being deprived of essential treatments for his disease. According to his lawyer, in his last weeks of life, Abu Hamdiyeh was treated for throat cancer with painkillers and antibiotics.

The funeral began at midday, with Abu Hamdiyeh’s body being carried from the Al-Ahli Hospital, around the city and eventually to the Wadi al Haria area. His body was buried in the Martyrs cemetery there. During the burial, the armed wing of Fateh, the Al Aqsa Brigade shot into the air in a gesture of respect whilst mourners watched. Abu Hamdiyeh’s family were present at the funeral and emotions ran high throughout the funeral march.

Demonstrators have since been expressing their outrage at the death of Abu Hamdiyeh and clashes between the people of Hebron and the Israeli military began before the end of the funeral and have continued for the following days. Hundreds of Palestinians have been injured with rubber coated steel bullets, as well as some who have been hit with live ammunition.

Abu Hamdiyeh’s death highlights the issue of treatment of Palestinians in Israeli jails, many of whom are on hunger strike protesting prison conditions and detention of political prisoners – including Samer Issawi who has now been on hunger strike for over 250 days. 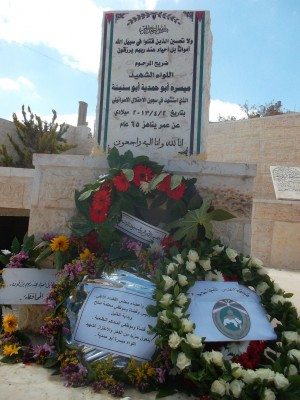