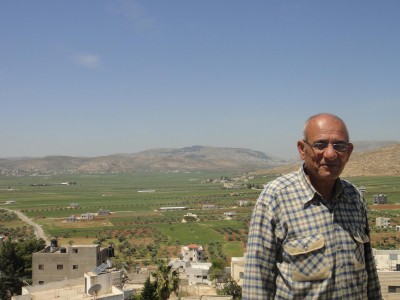 On the 22nd April 2013, 500 trees belonging to Beit Dajan villager Jamal Kanaan were uprooted by the Israeli military; making a total of six times since 2002 that his olive trees have been destroyed by the Israeli authorities.

Around 50 soldiers arrived in the early morning and uprooted the young trees by hand, removing them in jeeps before Jamal could arrive and intervene in the theft of his trees. The olives had been planted just one year ago, following the Israeli army bulldozing his previous trees. Each of the five previous times that Jamal’s trees have been destroyed he has replanted them; even though they often don’t even grow old enough to produce olives.

This year, the military once again gave Jamal no notification that his trees were to be uprooted; the only time that he has had any sort of notice was in 2005 when a letter was left under a stone on his land.

Jamal’s trees are in Area C, meaning that the Israeli occupiers claim full administrative and civil control over the land, even though it is privately owned by Palestinians. On the ground, this designation means that Palestinians have to ask for permission to build, to plant and to use their own land – this permission is rarely granted. The outskirts of most Palestinian villages, including Beit Dajan are This is used as a tactic to restrict the livelihoods of Palestinians and stop expansion of Palestinian villages, whilst grabbing more land for illegal Israeli settlements.

Despite the repeated destruction of his trees, Jamal remains steadfast, saying today “I will not leave my land. My land is like my ID card, my identity. I will always replant my trees on my land. Whatever the occupation does, I will not leave.”

In February 2013, seven demolition orders were delivered to the village of Beit Dajan, ordering the destruction of homes, electricity pylons and homes for sheep – this decision is currently being fought in the Israeli courts and the demolitions have currently been delayed. 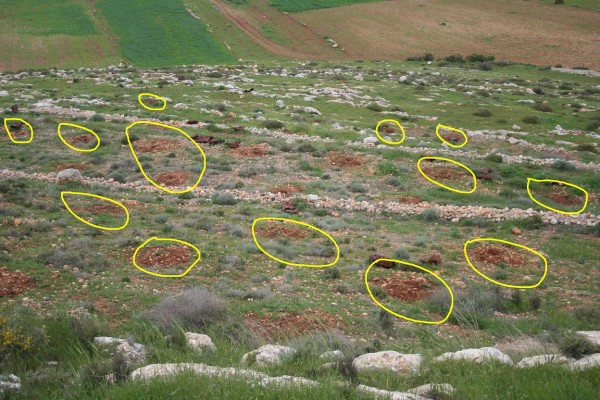 Jamal Kanaan’s land in 2012 after the Israeli military had removed his trees – circles indicate where they had been planted. Photo credit Beit Dajan Municipality