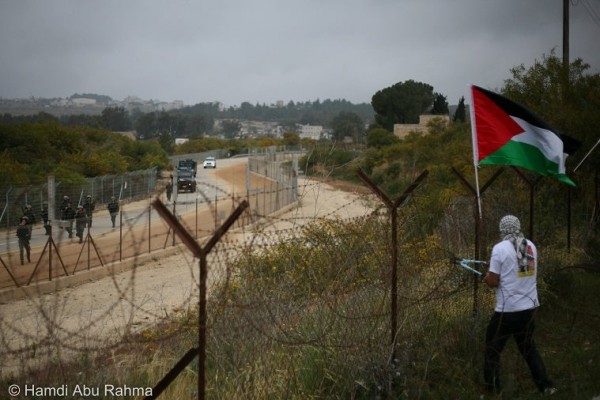 Protesters wearing surgical masks conducted a swift and efficient action against the Wall – a symbol and physical expression of apartheid – aiming to send a message to the Israeli authorities that the Palestinian people will “never agree to have Palestinian prisoners in Israeli jails.”

After around ten minutes, one Israeli army jeep arrived in the buffer zone behind the separation barrier and a single sound grenade was thrown at protesters, who left shortly afterwards, having completed their action.

Protesters wore shirts with the image of Bassem Abu Rahma of Bil’in, who was also protesting the cause of prisoners on 17th April, four years ago when he was killed by Israeli forces.

Palestinian prisoners are treated brutally under the Israeli occupation. Many are mistreated or tortured during detention and arrested on false or fabricated charges. Others are held under administrative detention laws, which mean that they can be imprisoned indefinitely without charge or trial. According to Addameer, there are currently 4,936 Palestinian political prisoners held in Israeli jails, including 178 administrative detainees, many of whom are held in Ofer.