Two Brothers Resistance To The Occupation Of Tel Rumeida

Two brothers, Hani and Hashem Al Azzeh, who have had enough of the harassment they face on a daily basis from the Israeli occupation forces and settlers, are taking legal action to remove a military tower placed on the roof of one of their houses in Tel Rumeida, Hebron. 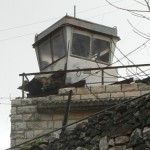 In 1998 the lives of the two brothers was turned upside down when the army arrived with a map of houses and said “We need your roof for security reasons.” There used to be a military tower behind the two houses, suddenly the army decided to put it on the roof. Despite filing petitions to the Israeli court at the time, the tower stayed on the roof and the family has endured fifteen years of violence and terror, including weapons being fired from the roof, water tanks poisoned and destroyed, and physical attacks on all members of the family including children. Both Hani and Hashem’s wives have been repeatedly assaulted when they were pregnant, leading to the loss of their unborn babies.

New military orders were issued to the family in June 2011, to place a military tower on the other house, as well as lights and cameras. Again the Al Azzeh family took legal action to protect themselves. The military orders were sent to the Prime Ministers Office in Ramallah. They were sent to the Civil Administration Ministry, Palestinian Legislative Council members and the Palestinian DCO. Also contacted were Louisa Morgantini amongst other members of the European Parliament, a legal delegation from Belgium and the Hebron Rehabilitation Committee (HRC). A complaint was made through a lawyer who argued the military tower must be removed because of the harassment to the Al Azzeh family. 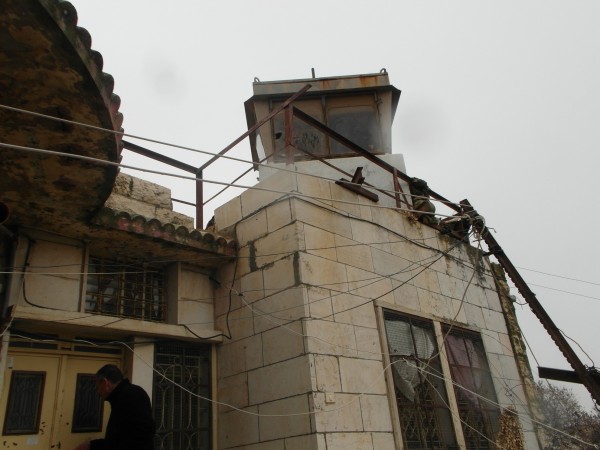 On Sunday 3-2-2013, Hashem and Hani Al Azzeh, received a visit from the Palestinian and Israeli District Coordination Office(DCO), a representative from the Israeli court, and lawyers from the Hebron Rehabilitation Committee who represent the Al Azzeh family in this case. The group made a fact finding tour of the two family houses and the surrounding area. They asked who made the escalations in violence, the army or the settlers? The Al Azzeh family replied “The army and the settlers.” The court representative suggested putting the tower on Hashem’s land, where he has olive trees. Hashem refused saying “when the tower is put on my land next will be more settlers in caravans and then I will lose access to my land. You can remove the tower and put it on the roof of the settlement which is higher and only a couple of meters away giving the soldiers a better view.” Hashem told the group about how the settlers who live directly behind his house were building on the balcony above his garden and planting trees, to expand the settlement. He argued that Palestinian residents had a right to drive a car in Tel Rumeida which at the moment they are denied, and that checkpoint 56 at the end of Shuhada street should be removed or moved to a location that allowed Palestinians access to Tel Rumeida by car. Of the military commanders present Hashem commented that some of them quoted ‘security reasons’ for not doing this and some appeared clueless. During the tour the violent settler Baruch Marzel leaned over the balcony and shouted down “We need the tower to stay there for security reasons because the Arabs are terrorists. These Palestinians make problems.”

There is a long history of abuse and terror which the family has endured. During the second intifada soldiers fired “all kinds of weapons” from the roof into the Bab Al Zawia area of the city according to Hashem. The water tanks on the roof of Hani’s house had the pipes cut, were poisoned, had feaces dumped into them and were eventually destroyed. Hani’s family now has to pump its water from a reserve cistern underneath the house adding an unnecessary cost to a basic human requirement. They also have had to rig up a series of hoses through the window to the taps and boiler with to get access to their water. 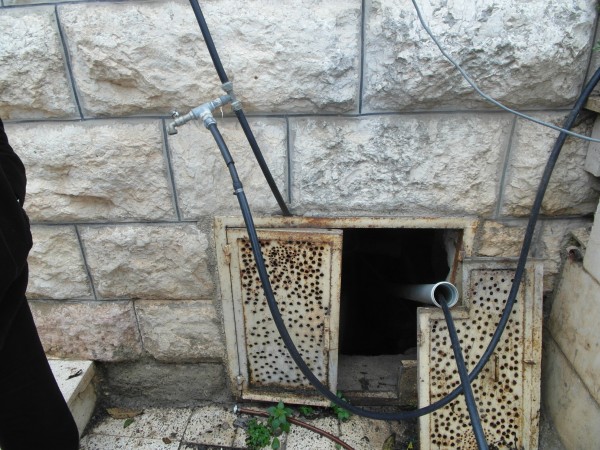 A makeshift water system collects water from below the house

Soldiers were sometimes seen naked on the roof and at other times danced or played football with stones in the middle of the night. The soldiers stomping around in their boots at night is very loud, Hani’s family has not had an undisturbed nights sleep in fifteen years. Hashem says that one day Hani’s daughter was playing in the garden and a soldier from the tower urinated on her head. Settlers threw stones at the families and their houses from behind the tower and then hid from the cameras of the family with the soldiers telling them, “You cant film them because this is a closed military zone.” The roof is declared a closed military zone but settlers are allowed onto the roof to harass. They have broken windows forcing Hani and Hashem to replace glass windows with metal shutters. 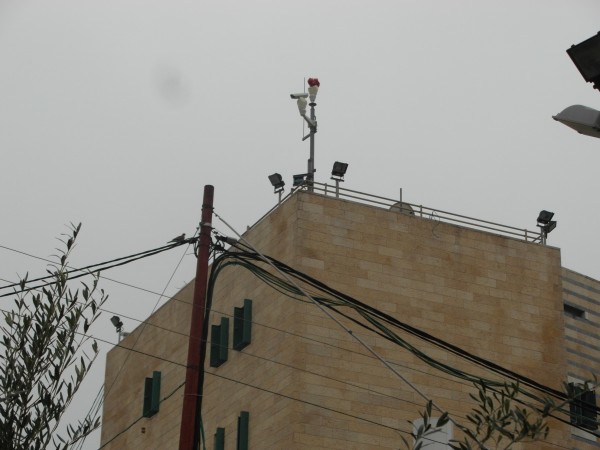 Cameras and lights installed above the home by the military

The stress and anxiety of this long term abuse is enormous. Hani’s wife lost her pregnancy six times due to harassment and assault. Hashem’s wife has been assaulted by settlers twice while she was pregnant, losing the pregnancy both times. Hashem’s children have regularly been assaulted by settlers. One time a rock was put in his sons mouth and his head smashed against the floor. Hani’s wife recieved long term care from ‘Doctors without borders’, a psychologist from the UN and with the support of her family and has given birth to triplets.

Hani is a security guard in the Hebron Municipality building and Hashem used to be an administrator in a UN medical clinic. Hashem lost his job in September 2011, after recieving the military orders in June 2011, because he was absent from work. Hashem had to go to Ramallah many times for meetings with lawyers, council members and the Civil Administration Ministry which coordinates between the Palestinian Authority and the Israelis. Hashem does not regret taking the time to fight for his home, his family and his rights, or losing his job to do so. One day a representative of the settlers came to Hashem’s house and offered him “twenty million dollars to leave”, he refused.

Hani and Hashem will go on resisting the illegal Israeli occupation of Tel Rumeida, until one day they can live with dignity and freedom. They will carry on quietly working on their case until the military tower on the roof of their house is taken away for ever.