At approximately 3:00 AM in the morning on Tuesday, the 19th of February 2013, 3 armed settlers from the illegal settlement of Kfar Tappuah raided the Palestinian village of Yasouf. Not only did the settlers vandalize several cars by slashing the tires, they also sprayed graffiti on several walls in the village, which included the main council building. The graffiti which was written in Hebrew, roughly translated to: “Paying the Price for Terrorism of Stones”. The slogan aforementioned is a reference to the settlers’ “Price Tag Campaign” which, since its inception has violently targeted several Palestinian villages. 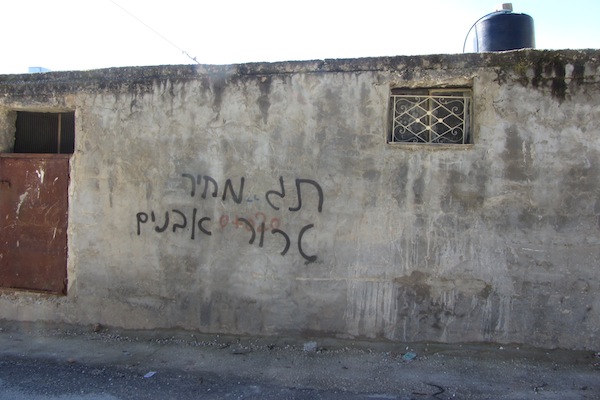 The mayor of Yasouf commented on the graffiti asserting that “For the Israeli, guns are like flowers but stones are the weapons of terrorists.” The villagers believe that this particular raid is retaliation for them farming their own land near the Israeli checkpoint of Zat’tara.

Not only did the Israeli military continue to watch the situation from the outskirts of the village without intervening to stop the vandalism, this raid was accompanied by the Israeli military itself. They began searching multiple houses, which ended with the arrest of 1 Palestinian. The man detained was 21 year old, Thaer Neem Obeid. He was later taken to the Israeli military prison at Huwarra and was still being held captive beyond the day of his arrest.

This is not the first time the Palestinians of Yasouf have been subjected to settler harassment, especially in the last few months. December 2012 saw the settlers uprooting a number of the village’s olive trees. For the story, read more here.