Overnight Israeli soldiers invaded the small village of Ni’lin, population of around 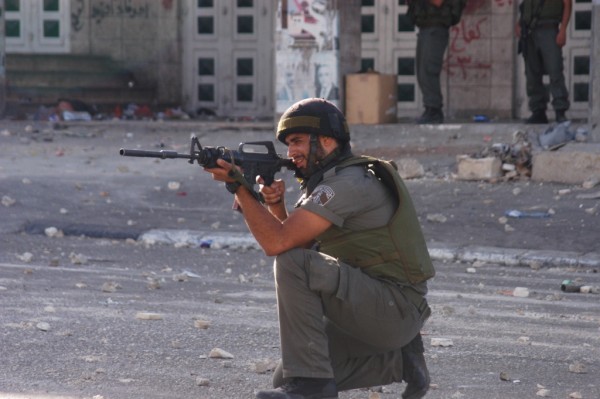 5000 people. The soldiers were attempting to make arrests as part of wave of arrests in the West Bank following protests around the recent bombing in Gaza.

A local Ni’lin resident said: “A very savage invasion to my village Ni’lin today. Hard clashes started after the Israeli occupation army invaded it and try to arrest people. You can hear all the shooting in the village was mostly live bullets. More than 1000 bullet they shot direct at the people.’ According to the same source, one man was shot in the leg with a live bullet, and another in the neck with a rubber coated steal bullet. Many more women and children were exposed to large quantities of tear gas when Israeli soldiers shot at houses in the village.

The invasion was caught on camera by Ni’lin residents, and the following video captures the violence of the attack.

Israeli violence in the West Bank appears to be rising. Last night, whilst the invasion of Ni’lin was underway, Channel 7 Israeli TV reported the comments of a senior Israeli military commander in the West Bank “a soldier operating in the field has the option to make the appropriate decision after evaluating the situation and the amount of danger he and his colleagues are facing, and that based on his personal evaluation, he can resort to the use of live ammunition”.

Following the publication of videos from demonstrations in Kufr Qaddoum in the northern West Bank and from Hebron in southern West Bank, which showed soldiers running away from stone-throwing Palestinian protestors, the army procedures regarding use of live ammunition are under review. Rhetoric from the Israeli army suggests that greater use of live ammunition is now accepted policy. The events in Ni’lin over night are a testament to this.

In a time of an increased ISM presence in Gaza and what looks to be a upsurge of violence in the West Bank, we call on international activists to join the ISM on the streets of Palestine. Volunteers of the ISM are requested to make a minimum of a two week commitment, long term volunteers are always needed.