On Friday, the house at Khan al-Luban, south of Nablus was trespassed by settlers from the illegal settlement of Ma’ale Levona. The settlers attempted to destroy the water supply at the house. 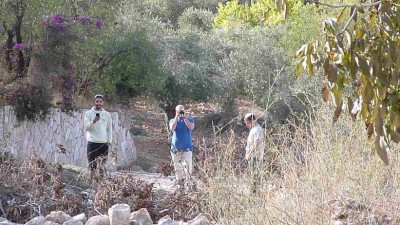 Earlier in the morning, house-owner Khalid al-Hamed, his two sons and two international activists spent some hours lifting rocks out of a pit outside the house where the major water pipes are. Settlers have previously thrown those rocks down into the pit attempting to break the pipes.

At around 12:15 one settler arrived and filmed this activity from the road.

Later, at around 14:15, the same settler returned with three others. The men filmed and photographed the house. They also made threatening moves towards the international activists.

One of the settlers, who was armed with an automatic pistol, then located the only other functioning water supply to the house and grounds and tried to destroy it by pulling the pipes from the wall. He also attempted to break the tap. The water supply for the house is an outside tap that sits around 50 meters up the hill from the house. Settlers have previously attacked and damaged the water supply and the other buildings on the property.

The settlers left the immediate area as the homeowner arrived on the scene.

Minutes later, two Israeli military vehicles arrived containing five soldiers. They continued to harass Khaled who was visibly distressed about this latest intrusion to his home and the damage caused. This harassment lasted another 45 minutes until the soldiers finally left, having taken no action.

For more background information on the situation at Khan al-Luban see here.

Stephen Alexander is a volunteer with the International Solidarity Movement.