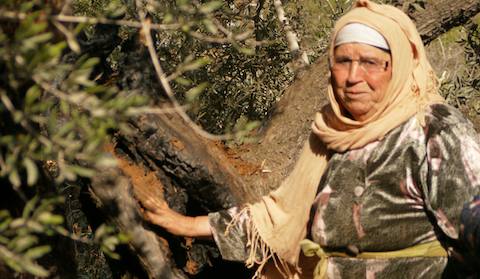 Latif Ali with one of her trees that were destroyed.

Last night in the West Bank village of Qaryut, 12 Palestinian owned olive trees were irreparably destroyed in a late night arson attack by Israelis from the illegal West Bank settlement of Eli.

The attack follows an incident last week, on the night of October 8th, in which settlers cut the branches from 130 trees with chainsaws. The branches will take some ten years to regrow, during which time the eight farmers who owned the trees will be without this crucial source of income. 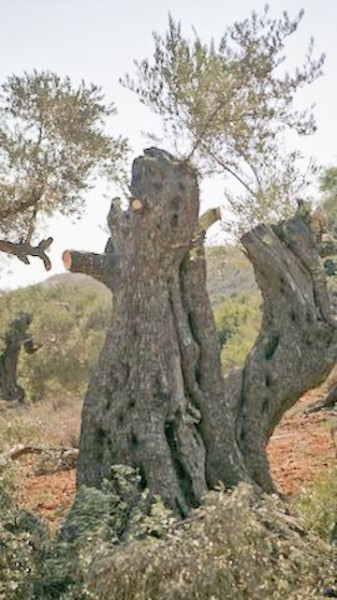 The attacks seem to have been carried out so as to maximize economic impact. Many Palestinian olive farmers are financially dependent on the olive harvest, which begun earlier this week. In last night’s attack, the settlers seem to have targeted the oldest and most fruitful trees. They set fire to hollows in their trunks, which kills the tree. Growing a new one to their size takes hundreds of years.

The timing, too, maximized the impact of the attack. For the last two years, the Israeli government has run a permissions system for Palestinians harvesting olives in areas near to West Bank settlements: although the farmers own both the land and the trees, they have to apply for Israeli permission to access the land. Permission is usually granted for impossibly short periods of time: in this case, the Qaryut farmers were able to harvest for either two or three days (traditionally harvest lasts between four and six weeks). The first attack came the night before the first permissions began in the area, thereby devastating the harvest the night before it started.

Such incidents are not uncommon. During the last two harvests, a reported 300 trees were destroyed in Quryat alone. In 2009, the village suffered violent attacks by settlers from Eli and another nearby illegal settlement Shilo (more here and here). Such attacks are commonplace across the West Bank during olive harvest, when the symbolic and economic importance of the crop make their farmers frequent targets for settler violence.

By Matt Reed (Matt Reed is a volunteer with the International Solidarity Movement (Name has been changed).