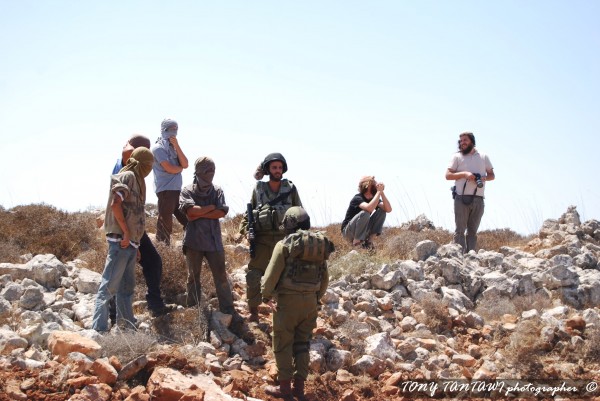 Settlers together with Israeli soldiers in Qusra. Picture from Tantawi Aljiniral

Three people were treated for injuries related to tear gas after an attack by illegal settlers in the village of Qusra near Nablus on Saturday night. The attack comes roughly a year after Qusra resident Issam Kamel Odeh, 33, died from Israeli gunfire after settlers invaded the village in September of 2011.

Shortly before six in the evening on Saturday, 5 settlers came onto the land of Akram Taysir Daoud at the edge of Qusra village. Soon after, they began beating the man’s wife and yelling obscenities at his mother. Additional raiders arrived until there were a total of fourteen settlers on the land.

In an attempt to get help, Akram Taysir called the mayor of the town. The mayor alerted the people of the village to come to the farm, and then called both the local District Coordination Offices to report the attack.

The invading settlers sealed a well on the property with a large stone.

Israeli soldiers arrived at the village thirty minutes later. According to Abdel Ahrim, a resident who observed the event, soldiers began firing tear gas shortly after their arrival. Abdel Ahrim stated that soldiers fired 30 total tear gas bombs. Thirteen of these were fired directly into the house of Abdul Majid Towfeek, a resident of Qusra.

Abbdel Ahrim repored that the commanding officer told the mayor that if any of the villagers followed the soldiers over the hill, he would burn the village down.

Soldiers fired three times before leaving the immediate area of the conflagration.

According to Red Crescent workers, three people were treated for injuries related to tear gas, two for inhalation, and one for an injury he received when a canister hit him in the ankle.

This is the second invasion by settlers on the village of Qusra in as many days. Yesterday, settlers from the nearby illegal development of Aish Coddish came onto land belonging to the

At that time, officials from the occupation forces told the mayor of the town that the only recourse for the farmer involved was to go to the local Israeli-administered court and file a complaint against the settlers. This type of legal appeal requires the petitioner to either hold an Israeli identification card, or to hire a lawyer who holds an Israeli ID to file the complaint on his or her