By Ben Greene and Ellie Marton

On Monday 17, September, six Israeli settlers from the illegal settlement of Itamar attacked three members of the Benijaber family, who were walking home to the Palestinian village of Aqraba from their olive groves.

Maher Hashem Mostafa Benijaber reported that he, his brother Omar and cousin Hafed were set upon by six men, three of whom were armed with semi-automatic rifles. The attack occurred just before 7 p.m., around 600 metres from their home. The settlers punched and kicked the three men, as well as beat them with rocks and sticks. They also tried to block the path back to the village so Maher and his family could not escape.

Omar managed to escape, calling neighbours for help. Meanwhile, the attack on Maher and Hafed continued. After the arrival of other residents, the Israeli attackers fled the scene. Maher then attempted to walk back to the village, but collapsed, lost consciousness, and had to be carried. 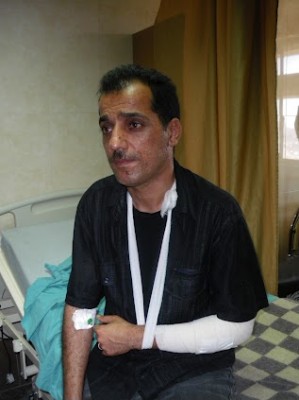 Maher Hashem Mostafa Benijaber in the hospital being treated for injuries after settlers attacked him on his way home.

Maher, Omar and Hafed all required medical treatment at the local clinic in Aqraba for the injuries they sustained during the beating, and Maher was hospitalized overnight in Nablus. All three men suffered injuries to their arms, head, back and legs, consistent with a sustained beating with sticks. When asked what he thought about the latest attack, Maher said, ‘if no-one had come to help, they would have killed me.’

The family contacted the Israeli army via the Palestinian Police and District Coordination Office to report the attack, however the army instead visited Yanoun village, which is also near Itamar settlement. Despite being informed that they had gone to the wrong village, they never attended the scene of the attack in Aqraba or spoke to Maher.

The attack on the Benijaber family is just the latest of many on the village of Aqraba. Four days previously, an elderly shepherd was attacked and forced to flee from his fields back to the village. The attacking settlers then stole some of his sheep. Such attacks on Palestinian villages are commonplace throughout the West Bank, and there is effectively impunity for settlers who carry them out. According to the Human Rights Watch 2012 report, “The Israeli government generally took no action against Israeli settlers who destroyed or damaged mosques, homes, olive trees, cars, and other Palestinian property, or physically assaulted Palestinians.” Illegal settlements such as Itamar continue to be encouraged to expand with the support of Israeli government and occupation forces.

Maher’s room at Rafidia Hospital happens to be across the corridor from Akram Taysir Daoud, who suffered a similar attack in the village of Qusra on 15th September and remains in hospital. Report at: www.palsolidarity.org/2012/09/qusra-man-left-for-dead-after-settler-attack/

Ben and Ellie are volunteers with the International Solidarity Movement (names have been changed).