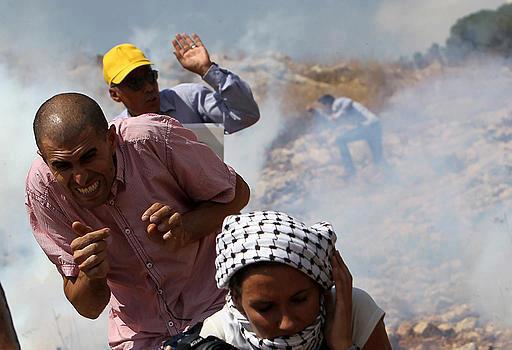 Three Palestinians were injured and 5 arrested today during Nabi Saleh’s weekly demonstration. Israeli military set up road blocks surrounding the village early this morning in order to prevent people and journalists from participating.

At 4.30 p.m., Malek Tamini was shot with a live bullet which went through his hand and the side of his body. He has undergone surgery for his injuries. One Palestinian suffered an open wound after being shot with a tear gas canister during protests. Soldiers were firing tears gas canisters directly in to the crowd with the intent of causing serious injury and then prevented the ambulance from entering the village for one hour . One local resident received stitches in Ramallah hospital after suffering a head wound from a rubber-coated steel bullet.

Five Palestinians protestors including Mohammad Khatib and Bilal Tamimi of the popular committees, a student journalist, and two young women activists were arrested in the morning while walking towards the village spring which was annexed by the nearby illegal Israeli settlement, Halamish. All have  has since been released.

Nabi Saleh is a small village of approximately 550 people, twenty kilometres north west of Ramallah in the West Bank of the Occupied Palestinian Territories.

In December 2009, the village began weekly non-violent demonstrations in opposition to the illegal Israeli colony of Halamish annexing of the  fresh water springs and stealing of more of the village’s land.  Since An Nabi Saleh began its demonstrations, the Israeli military has brutally sought to repress the non-violent protests, arresting more than 13% of the village, including children. In total, as of 31 March 2011, 64 village residents have been arrested. All but 3 were tried for participating in the non-violent demonstrations. Of those imprisoned, 29 have been minors under the age of 18 years and 4 have been women.

Paddy Clark is a volunteer with Jordan Valley solidarity.