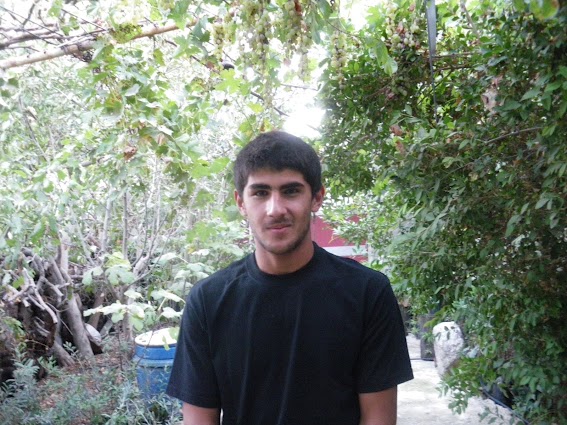 Jalaal and his family expressed their desire to thank everyone who has donated through ISM. (photo credit: Ellie Marton)

On Saturday 15th September a group of four internationals from ISM joined the Daraghmah family at their home in al Luban to celebrate son Jalaal’s release from prison. Thanks to many generous donations ISM was able to pay the five thousand shekel bail ($1300) and co-ordinate Jalaal’s release after he had spent 17 days in Israeli jail. Jalaal was arrested for trying to protect his family when 30 settlers invaded their property, destroying their car and beating his two young brothers and his mother. Following the attack, none of the settlers were questioned or detained, yet Jalaal who acted in self defense when he hit one of the intruders with a gardening pick, was arrested at the scene – see previous ISM report here: https://palsolidarity.org/2012/08/child-wounded-by-settlers-my-brother-was-arrested-for-protecting-my-mother/

Despite the recent trauma that the Daraghmah family has gone through, they welcomed the ISM volunteers to their home, sharing tea and fresh produce grown in their garden.  Jalaal’s two younger brothers (Mu’min, 13, and Nour al-Deen, 9) who were so badly beaten in the attack that they had to be hospitalised, displayed incredible trust and affection through their interaction with the volunteers.

Jalaal and his family expressed their desire to thank everyone who has donated through ISM. They are relieved and happy that Jalaal has returned home and are consoled by the fact that their family’s ordeal has been voiced internationally.

Yet for the Daraghmah family this was not an isolated incident but rather one in a series of attacks upon the family and their property. It is for this reason that International volunteers from ISM are striving to maintain a night time presence in the property in an effort to deter groups of Israeli settlers from neighboring hilltop settlements from trespassing on the land. Israeli settlements in the Palestinian territories are illegal under international law and violate the Fourth Geneva Convention.

While Jalaal’s release is a cause for celebration, the Daraghmah family remain concerned for their future safety in their home. The family remain at risk of hostility from the settlers and at being penalized by Israel’s two tier judicial system, which seeks to collectively and disproportionately punish the Palestinian people.