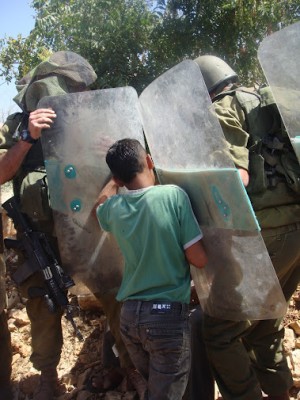 Palestinian, Israeli, and international activists gathered in Beit Ummar for the village’s regular Saturday demonstration against the nearby illegal Israeli settlement of Karmei Tsur, which has annexed village land. The demonstration focused on the August 27 destruction of a new Beit Ummar greenhouse by settlers, which occurred as the Israeli military stood by. The demonstration culminated in a young boy being kicked to the ground by an Israeli soldier.

Activists from the USA, UK, Japan, and Norway joined the villagers in taking a different route to the usual Saturday demonstration, surprising the Israeli soldiers, who had assembled elsewhere. Their route as they reached the Apartheid Wall was immediately blocked by 3 soldiers with riot shields. As more soldiers arrived, this number swiftly increased to around 45 – easily outnumbering the unarmed protesters.

The Israeli military formed a line, shoulder-to-shoulder, holding large riot shields. They harassed and targeted individuals, pushing and shoving Palestinians who were attempting to walk on their own land, including young children. The demonstrators retaliated peacefully by chanting and questioning the soldiers about their decision not to take action during the settler attack on the greenhouse. Soldiers also took pictures of individuals present – pictures taken at peaceful demonstrations have in the past been used to justify arrest of Palestinians and deportation or denial of entry to internationals. 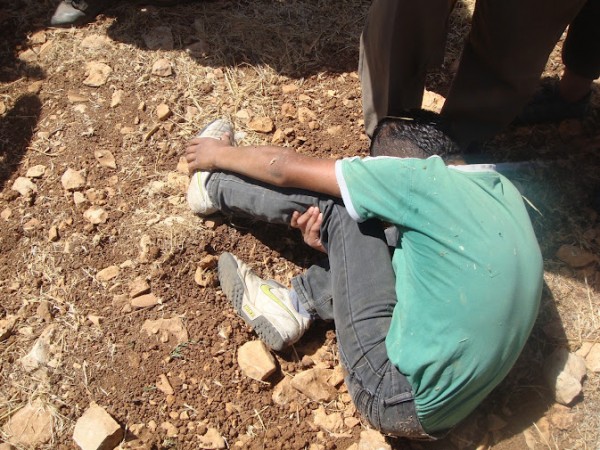 Young Palestinian boy after being kicked by Israeli soldiers

After a prolonged face-off, the end of the demonstration was announced, and the protesters turned to leave. It was at this point that a 12-year-old Palestinian boy from Beit Ummar was kicked in the leg by an Israeli soldier, knocking him to the ground. The remaining soldiers immediately tightened their line around the activists and villagers, effectively preventing them from leaving, as well as shoving many with riot shields in the process. Concerned about the child, the protesters gathered around him and he was carried away from the soldiers, where he recovered with no major physical damage. The Commander of the Israeli forces in the village refused to comment on the kicking of the boy when questioned.

Ellie is a volunteer with The International Solidarity Movement (name has been changed).