Just below the illegal settlement of Kiryat Arba, situated on the the eastern outskirts of Al Khalil (Hebron) is the Palestinian area of ar-Ras.

A quick online search of the Israeli settlement of Kiryat Arba provides general knowledge on the founding history and how it has been subject to Palestinian resistance since 1981 but fails to inform the reader of the consequences for the indigenous Palestinians living nearby the relatively large (ca. 7000 inhabitants) settlement. Nor will one find written that such colonies are considered illegal by international law as confirmed by the International Court of Justice. Nor of the Ibrahimi Mosque massacre in 1994 which was committed against Palestinians by an Israeli settler from the same area.

Hebron residents regularly speak with the International Solidarity Movement about constant violent attacks by the settlers, land expropriation by Israeli policies, lack of freedom of movement and the requirement of special permits for car use, lack of running water, and demolitions.

In 2006, Palestinian landlord Fayiz Arajar began the construction of a large building intended to house a dozen shops and several families. The building is formidably situated, overlooking the olive grove of the ar-Ras area and the distant white houses of Al Khalil, flickering in the heat.

In 2007, as the project was nearly completed, Israeli settlers occupied the building. Subsequent to a high court decision to evict them, settlers from across the West Bank gathered in the house ready to defend their illegal takeover of the building. The eviction deadline was set to December 4, 2007 by the high court.

The week leading to the deadline was tense. Israeli settlers vandalized the Palestinian cemetery, burned Palestinian cars, and attacked Palestinian houses. The escalation in such attacks came due to the arrival of thousands of illegal settlers in support of the squatters. They succeeded in fighting the eviction force. Israeli authorities simply refrained from further attempts to remove them and, as seen before, allowed the story to twist from that of property theft to a question of security (of the settlers). In recent years, Israel has even decided to erect a military checkpoint for Palestinian pedestrians in the interest of ‘protecting’ the settlers.

Muhammed Al-Jabari ‘Abu Naim’ and his family live in a house about 100 metres from the occupied building. On May 28 of this year, they began to build an extra floor ontop of their house. The family of 15 members needed more space.

With reference to the Oslo accords (Annex 1, article XII) Palestinians are not allowed to build within 50 metres of security roads. In Abu Naim’s case, a security road was announced with the construction of a new military checkpoint in the area. The legal value of Abu Naim’s construction permit was overruled although his house is far from the 50 meter no-construction zone. The land on which the house was built 14 years ago has belonged to the Al-Jabari family since before the Israeli occupation in 1967.

For now, the mid-construction upper floor is left as an empty shell without windows or doors. Israeli bulldozers are on stand by to demolish the entire house should Abu Naim continue construction.

Prevention and annexation of resources 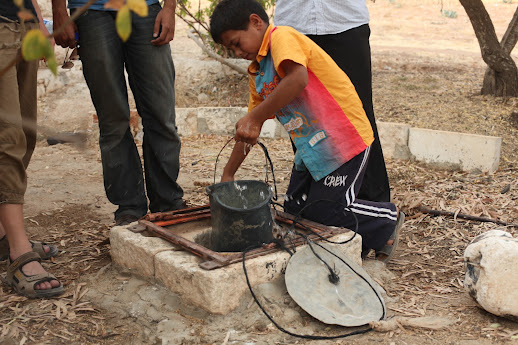 Across the olive grove and by Kiryat Arba’s barbed wire fence lives Kayid Dana and his brothers. Another stunning view embraces you from just outside their house, disrupted only by a looming Israeli watchtower. Most of the occupied West Bank is spotted with these grey towers. Watching from their windows, the ever present occupation, reminding Palestinians that privacy is a luxury that few, if any, enjoy.

The Dana family has been living on the same land for the past 50 years. In 1958, the Israeli authorities repetitively offered them money to leave the house and make room for the growing illegal settlement. The family refused and nonetheless Israeli forces bulldozed half of their garden.

As of June 24, the Dana family has been without water. Israeli authorities prevented water trucks from entering the area to refill their water tanks. As a result, Kavid and his family are relegated to pump water from an unsanitary well outside their home. This is where they encounter the next problem: water is only available for a couple of hours each day. This is not enough to supply their 4 camels (100 liters/day) and the most basic household needs.

North of the Dana family home, through the olive groves, lives the Abdul Hay family (Abu Hossni). Their windows are fenced to prevent Israeli settlers from shattering the glass with the stones they throw. On December 4, the family was subject to a vicious attack that left 3 with dumdum (expanding bullet) wounds. Dumdum bullets are a type of live ammunition that enter the body, expand, and cause permanent injuries or death. Although dumdum bullets have been known to be used by Israeli settlers, they are illegal according to international law.

Jamal Abu Saifan, who lives in the area, captured the incident on his camera and explains how a lightly injured Israeli settler was choppered away 15 minutes after his injury, whereas the 3 Palestinians wounded by gunfire, one critically, waited 3 hours for an ambulance.

The ambulance attempting to reach them was stopped and denied entry to the area by Israeli forces. 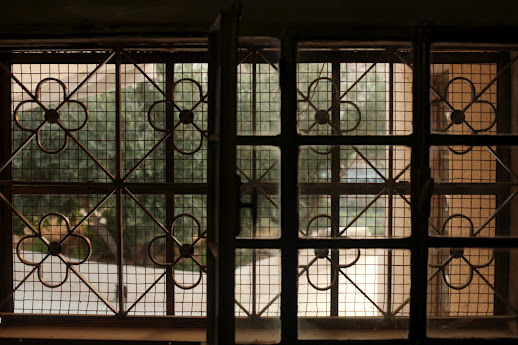 Unfortunately, settler attacks are far from rare and have been occurring since Kiryat Arba was established in 1968. The purpose of these violent attacks, and the army violence and policies that accompany them, are not only to injure people and destroy their lands. That is only a strategic measure to reach an ultimate goal: the ethnic cleansing of Palestine.

The next step by Kiryat Arba is the construction of a new road which will divide the vital Palestinian olive groves down the middle. The road will be inaccessible to Palestinians, not only preventing Palestinians from tending to their trees on the other side, but annexing further land, expropriating an economic necessity, and making life more difficult for the indigenous Palestinians.

Despite the collection of circumstances to make life difficult, all the families in the area have made the choice to remain on their land despite the uncertainty and pressures of their everyday life under Israeli occupation.

Markus Fitzgerald is a volunteer with the International Solidarity Movement (name has been changed).