Asira al-Qibliya, a village located south-west of Nablus, was attacked by illegal Israeli settlers yesterday. The attack lasted all afternoon leaving 7 Palestinians injured, of which 5 required hospitalization. Settlers fired live ammunition at the Palestinians, and one man was in critical condition after being shot in the head.

Israeli settlers arrived at Asira in the afternoon and before any Palestinians or Israeli soldiers came they began the attack by setting fire to the land. The people of Asira arrived and responded by throwing stones towards the settlers, attempting to force them off the land they were destroying. 3 of the 60 settlers were carrying weapons with live ammunition. They began to fire at the Palestinians and 20 year old Nemer Fathir Asaira was shot in the head. 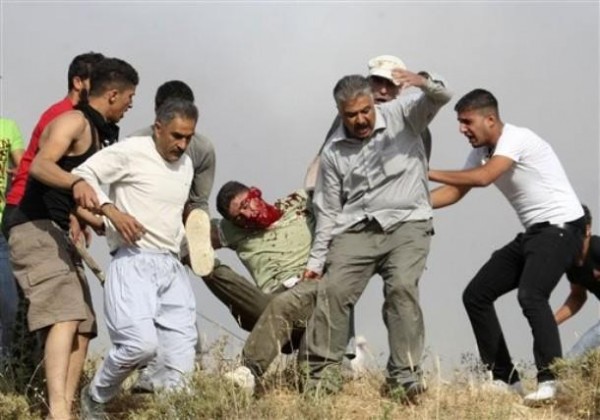 Paramedics were prohibited from entering the street so a private car had to evacuate Nemer to an ambulance. 4 more Palestinians were seriously injured by stones that were thrown by the Israeli settlers, including an elderly woman, who was hit in the head, Ahmed Jaber Saleh, whose nose and cheekbone were shattered, and his brother whose leg was broken.

All victims of the attack were taken to Rafidia hospital in Nablus. A lot of minor traumas were treated at the scene of the attack, amongst them 13 year old Mohammed Dawood Salah, whose upper arm was hit by a stone.

Shortly after the attack began, the illegal settlers were joined by the Israeli Army. Approximately 30 soldiers arrived at the scene. They watched without intervening as the attack by settlers intensified and increasingly more Palestinians were injured.

Some of the Israeli soldiers began filming the crowd of Palestinians who were throwing stones. An elder from Asira commented that they do this because, “they want to feed a certain stereotype to the Western media.” Filming is also used to intimidate and threaten a future arrest.

The settlers retreated in the late afternoon leaving only soldiers behind, who continued to intimidate and attack the villagers by using tear gas and sound bombs. The fires that had been started by the settlers earlier in the day continued into the late afternoon. The Israeli Army preventedthe Palestinian firemen from putting out the flames that were destroying the land.

Following the attack, the Israeli army proceeded to enter the village from its two main roads. The number of soldiers seemed to outnumber that of the Palestinians, of whom many were minors. Many inhabitants of the village feared that the situation would escalate even further. In the evening, the Israeli military retreated, but not without leaving behind several tear gas grenades and sound bombs.

Whilst confronting the soldiers, the residents of Asira chanted, “our land, our streets.”

A middle aged Palestinian man who chose not be named, stated that, “the settlers usually shoot and go. They come prepared to kill.”

One day after the attack, Nemer Fathir Asaira, the young man shot in the face, remains in hospital. He was released from Intensive Care Unite, but doctors have yet to determine if he requires surgery.

According to Nemer’s father, his family and friends have been by his side day and night and they will continue to be so until he is released from hospital.

33 year old Ahmed Jaber Saleh, whose nose and cheekbone were broken by a stone, was visited by his mother, wife and son today. His brother, whose leg was broken by a stone, had already been released from the hospital. Ahmed and Nemer both remain in anticipation of a decision by the hospital of their treatment plans.

Settlements: a culture of impunity to the law

Approximately 700 Israelis live in the illegal Israeli settlement adjacent to Asira al-Qibliya. This colony, like 250 others throughout the West Bank, is considered illegal under international law as a violation of Article 49 of the Fourth Geneva Convention. This illegality has been confirmed by the International Court of Justice and the United Nations Security Council.

The recent attack was only one of many in the history of the village. In 2011, similar attacks occurred on a weekly basis. This year, the settlers have attempted attacks on Asira up to 3 times each month. The Israeli settlers participating in these aggressions are not always inhabitants of the area. Nevertheless, they show their unity by wearing similar coloured cloth, on the most recent occasion white t-shirts. This may be an indication of long-term planning behind the attack.

According to the United Nations Office for the Coordination of Humanitarian Affairs (OCHA), over 90% of complaints regarding settler violence filed by Palestinians with the Israeli police in recent years have been closed without indictment. OCHA reports that, “ the root cause of the settler violence phenomenon is Israel’s decades-long policy of illegally facilitating the settling of its citizens inside occupied Palestinian territory. This activity has resulted in the progressive takeover of Palestinian land, resources and transportation routes and has created two separate systems of rights and privileges, favoring Israeli citizens at the expense of the over 2.5 million Palestinian residents of the West Bank.”

The residents of Asira al-Qibliya are unable to lead a secure life under the constant threat of harassment, intimidation, and attack by the Israeli Occupation Forces and illegal settlers alike.