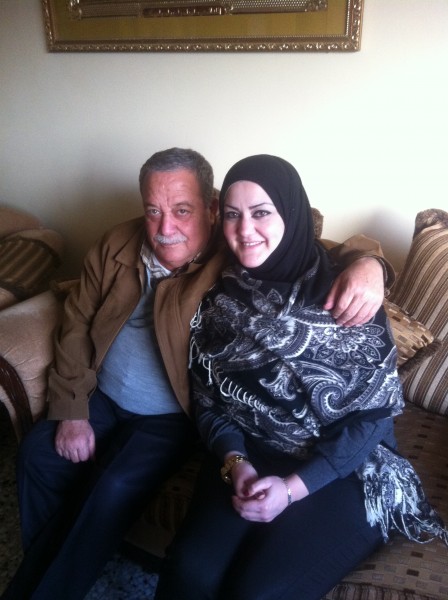 Amani al Khandaqja with her father, pose following her release

“You are a very clever woman Amani, you are the first free woman from Ashkalan, this brings me great frustration.”

These are the words of the Chief of Intelligence at Huwarra Camp where Amani al Khandaqja was forced to go during her first Sunday of freedom after her 10 days of imprisonment. On the 20th of March, al Khandaqja was taken from her home, Nablus City, in a 2AM night raid, shackled, handcuffed and blindfolded, her 10 days of imprisonment were as follows:

On entering the Ashkelon interrogation prison, al Khandaqja made the decision to begin an open ended hunger strike, bringing her to the immediate decision of the military to be held in solitary confinement. Her days started with fierce determination to show that she is not and will not be intimidated by the interrogators or the prison.

When taken for the routine strip search, al Khandaqja simply but vehemently refused anything of the sort. She spent her days in a room too small for any comfort, the light was on day and night, and food was used as a constant temptation out of her hunger strike.

The military used low, pathetic tactics including sitting her in front of a table with chicken, burgers, chips and rice. On refusal of the food soldiers asked al Khandaqja , “Why do you not like food?” al Khandaqja was quick to reassure them that she is in fact very fond of food but she “like [her] mother’s food, [her] sisters’ food, even [her] brother’s food, but [she] will not eat [their] food.”

Tactics quickly became even more personal by offering Amani an opportunity to see her brother Bassam. Bassam is a political prisoner in Ashkelon’s mixed sex prison, who is 9 years into his life sentence. The terms of the negotiation were to stop the hunger strike for a short visit. The negotiation was rejected by al Khandaqja.

As the days and nights passed and interrogation continued, the military became weaker and weaker. “All they had to say was that I was too active on Facebook.” Amani explained how the interrogator informed her, “I know your words have power” but this simply was not enough to keep Amani captured.

The Israeli military often offers monetary rewards for those it convinces to become collaborators against the Palestinian people, and with Amani the offers came thick and fast. Having studied psychology at university, and one who has traveled to Europe working with women groups in campaigns addressing issues such as domestic violence, she is a woman who is not easily scared or intimidated. This was evident to the Israeli military.

It is true that al Khandaqja is a threat to Israel’s apartheid, but not because of their usual rhetoric of her being a “violent Palestinian,” but because Amani is a clever, determined, educated, and passionate young woman who, it seems, will stop at nothing in her struggle for human rights. When asked if and when she will return back to work, Amani replied “I am always working. I will not stop. I write everyday about the conditions of the prisoners. I am only writing for peace, and I do not want to see anymore violence”

Amani, who is from Nablus City was releasd at Turkoomia checkpoint in Al Khalil (Hebron), 77 kilometer from Nablus. She was left with no phone or money. Fortunately she was able track down her father and have a car sent to her, not before visiting friends in Al Khalil as word had gotten out about her release. That night, the 30th March, Amani returned home split with emotion. The prospect of seeing her family filled her with happiness but to have left her brother Bassam and personal friend Masser Halabi behind brought an overwhelming sadness, a sadness that is sure to inspire and motivate Amani to continue the struggle with more passion and determination than ever before.