by Robin and Axel 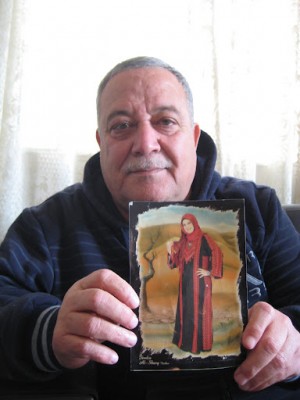 Amani’s father displays the photo of his daughter, Amani, who was taken away by the Zionist military earlier this week.

The soldiers arrived at 2am, whilst the family was sleeping, they surrounded and then entered the house. One of Amani’s brothers was awoken by loud voices outside his window, upon looking out he saw a number of soldiers interrogating members of a neighboring household.

As he ran to wake up his father, Saleh, a series of loud, hard bangs could be heard on the front door of the household.  After repeated banging, Saleh went down to open the door, and the Israeli Occupying Forces violently forced entry into Amani’s home. The entire family of 9 were forced onto the roof of their own home with their hands held above their heads and held at gun point.

According to Saleh, the trespassing soldiers were nervous and twitchy, making the situation unpredictable and terrifying for the entire family who, suffice to say, felt severely threatened.

“I asked for permission to sit down as I have problems with my knees,” explains Saleh. “This request was denied.”

While the family was interrogated on the roof, soldiers ransacked the house with dogs, justifying this brazen act of terrorism with the unsubstantiated and unlikely claim that Saleh’s family home might contain weapons or explosives.

The soldiers asked Saleh repeatedly about his imprisoned son, Bassem, who has been held in Israeli prison since the second Intifada. Amani herself was also mentioned by the soldiers as they claimed she had been writing about the Palestinian struggle for equality and rights on the Internet and had been active in the support of political prisoners.

In an interview with her father, he described her as an incredibly brave person with an extraordinary passion for the Palestinian struggle for the most basic of human rights. In any event it was clear she was wanted by the Israeli’s primarily for the fact that she had dared to put her thoughts and feelings in print concerning the illegal Zionist occupation of Palestine.

After two hours of interrogation, harassment and threats, the soldiers decided to arrest Amani despite the fact that they did not find anything in the house and were unable to produce any material sufficient to press charges.

As her father emphasized, “I am not worried about her destiny because she has done nothing wrong and can’t be held guilty of any crime. But my heart is breaking from her being taken away from us.”

Despite the fact that Amani has not been accused in a court of law, let alone found guilty of any crimes, there is a great possibility that she will be held for a long time nonetheless.

The biased Israeli legal system allows for what is euphemistically referred to as “administrative detention,” a law adopted from the British Mandate era that allows for the confinement of persons without charge or trial. Under this law a person can be held in prison for six months at a time, without being put in front of a judge or even being formally suspected of a crime. After six months, the procedure can be repeated and therefore one can be, in effect, held for an indefinite amount of time.

Throughout Amani’s arrest the IOF soldiers repeatedly made clear their Zionist ideology and how they viewed her hopes for a free Palestine:

“This is not Egypt, Tunisia or Libya. A popular uprising, leading to a revolution is not possible in Israel.”

With these chilling words, and not-withstanding the irony of Israeli soldiers comparing their own country to one of  the many U.S backed dictatorships that dot the region, Amani was handcuffed and dragged into the bracing night air, away from her broken home and devastated family.