New
Home / In the Media / When teargas and rubber bullets are not enough: Israeli soldiers release the hounds on unarmed Palestinian protesters

When teargas and rubber bullets are not enough: Israeli soldiers release the hounds on unarmed Palestinian protesters 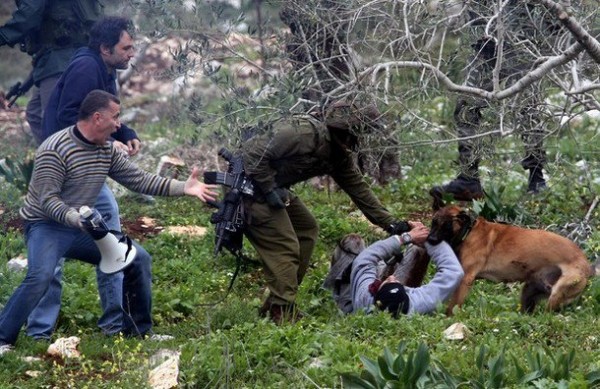 The jaws of Zionism locked – Click here for more photos

In Kufur Qaddoum, clashes between Israeli Border Police officers who shot tear-gas projectiles and rubber-coated bullets and local youth who threw stones at the forces developed. Roughly 15 minutes later – in a scene that seemed as if it was taking place in the American South of the 1960s – Border Police officers decided to sic an army dog at a group of the demonstrators, standing several dozens of meters away. The dog chased after the protesters, biting and locking his jaws into the arm of one of them – Ahmad Shtawi.

For long minutes, the dog would not release its hold of the bleeding arm, even as its handler arrived at the scene and tried to order it to do so. The Border Police officers then arrested Shtawi, despite the fact he was in obvious need of medical attention. Morad Shtawi, a member of the village’s popular committee, tried to reason with the commanding officer into releasing young man. He was then pepper-sprayed and arrested as well.

Two other residents of the village were injured during the demonstration, after being hit by tear-gas projectiles shot directly at them. One was hit in the leg and another in the shoulder.

The weekly protest in Kufer Qaddoum, west of Nablus, was dedicated to the memory of Rachel Corrie – an American protester who was killed after an Israeli D9 bulldozer drove over her in Rafah exactly nine years ago, on March 16, 2003.

In Nabi Saleh, at least three protesters were injured during the demonstration, including an Israeli woman who was hit in the head by a rubber-coated bullet. The two others were hit lightly injured, one by a rubber-coated bullet and the other by a tear-gas projectile. The woman was evacuated to the Ramallah hospital.
Earlier today, large forces entered the village and sprayed a foul-smelling liquid known as the Skunk from a water cannon.
During the night, the army staged yet another raid on the village, the fifth in a week’s time.

In Ni’lin,, demonstration was held despite the rainy weather, the demonstration was dedicated to the American activist Tristan Anderson who was shot by high velocity tear gas projectile in his head by the Israeli soldiers in 13.03.2009 in the middle of Ni’lin village. also commemorating the anniversary to the killing of Rachel Corrie in gaza strip by an israeli military bulldozer.
Israeli soldiers fired massive tear gas canister at protester,rubber coated bullets and skunk water,one demonstrator was hit with a rubber bullet in his hand and was treated directly.