The people of Al Ma’sara gathered after praying time to march to their land, confiscated for the nearby illegal settlement. Approximately 70 internationals were present, most of them Christians coming back from a conference in Bethlehem titled, “Christ at the Checkpoints.”

The crowd marched peacefully to the end of the village, where occupation forces were waiting. As they outnumbered the military present, they were able to pass through the soldiers and march towards the land of locals. The marchers advanced peacefully and were stopped when reinforcement arrived.

The crowd stood their ground, facing the army. Slogans against the occupation were chanted, and many demonstrators started talking to the soldiers. “A good way to start building bridges instead of walls,” said one of the activists.

Two participants were detained for a few minutes and then released. The march ended peacefully.

The village lies roughly 10 kilometers west of the 1948 “Green Line” (the only internationally recognized ‘border’ between Israel and Palestine) the massive “Gush Etzion block” of seven Israeli settlements (pop. 60,000) lies nearby, products of Israel’s campaign to produce illegal “facts on the ground.”

These ‘facts,’ in turn are used to justify giving the Israeli military full control of most of the village’s lands and the annexation of thousands of dunums of land via planned Wall construction.

Not only would the wall’s route cut off 3500 dunums of Palestinian lands in Al-Ma’sara and limit access to services in larger communities, but it would also cut off the village’s water access and the primary routes between Hebron, Bethlehem, and Ramallah—three of the largest cities of the West Bank.

Any one of these developments would hit Al Ma’sara and surrounding villages hard, but together they are intolerable and demoralizing. Even though there is no barrier or construction currently underway, some Palestinian farmers have chosen to stay off lands east of the Wall’s projected path, fearful of settler and military attacks.

Ramon Garcia is a volunteer with International Solidarity Movement (name has been changed). 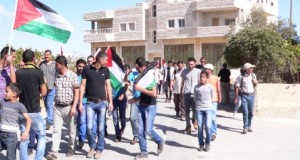 Seven years of popular resistance in Al-Masara: ‘We want freedom, not aid money’ 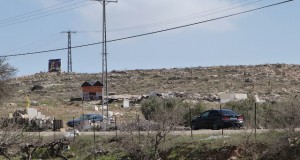