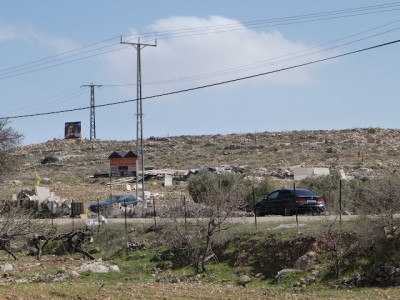 There is a place where a ground-level concrete line runs beside a country road through olive orchards, grape vines, blossoming almond trees, and homes—all Palestinian. This is the projected path of a new segment of Israeli Apartheid Wall through Al-Ma’sara, a small village 13 km south of Bethlehem in the Occupied Palestinian Territories. Since 2006, protesters have held weekly demonstrations opposing the Wall’s construction—which was halted in 2009, possibly due to financial constraints. But attacks on Palestinian homes and infrastructure are on the rise, and plans have been announced to renew construction in the near future. One of the few remaining obstacles to the Wall’s extension is the Taqatqa house, a private home in the path of the wall extension, that has become the target of settler attacks and vandalism. In coming weeks the people of Al-Ma’sara, together with Palestinian, International, and Israeli solidarity activists, will converge on the house to restore it and transform it into a center for resistance against the Wall and settlement land theft.

There are many things about this house that recommend it as a site of popular resistance to the next phase of Wall construction.

Located in a fertile valley, the property remains a viable agricultural space in spite of attacks, intimidation and settlement expansion. Where apricot and olive trees were once cut, the family planted grape vines and vegetables. Neighbors said that when Khader Tayatqa, late father of the building’s current owner, suffered a fatal heart attack, it was due to the stress of attacks on his land and family. Nearby lie other properties in contention, including a hill belonging to Raed Taqatqa, who has made his continued presence also into an act of resistance, in spite of determined efforts of Israeli violence to drive him off his land.

After Raed refused to sell, Israeli soldiers removed supporting rocks from beneath his caravan to build a roadblock, damaging it irreparably “by accident.” His home destroyed, Raed built a makeshift structure of cardboard and found materials, which was leveled by settlers.

Such vigilante attacks on Palestinians who resist, on the parts of settlers and Israeli soldiers both, are common—such as an attack on the village of Burin last week.

Along with a favorable location, is the building’s history. Built in 1960, before Israel captured the West Bank and lay claim to its lands, the home is ‘legal’ even under Israel’s stringent permitting system, prejudiced such that Palestinian homes are often demolished using red herring justifications for their ‘illegality.’ As long as repairs only restore and add no additions, demolition of the building cannot be legally supported by the Israeli state. There is also already a history of resistance at this site, where years of weekly demonstrations and a Land Day demonstration have impacted the Wall planning process, such that far less land would be walled off from Al-Ma’sara than from neighboring or similar communities. 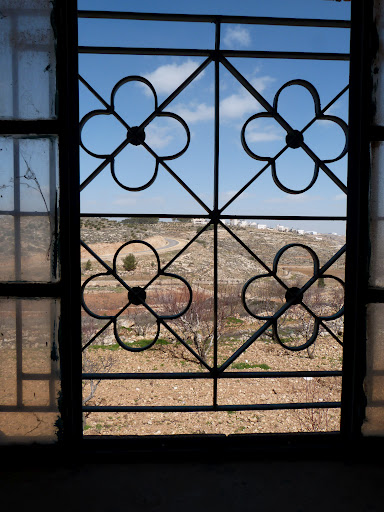 House at the Seam – Click here for more photos

The most serious threat now is from settler and soldier attacks which, like those on Raed’s property, are intended to damage the building and discourage resistance. Thus far, while settlers have stolen a door, some electrical wiring and a transformer, the house needs few repairs before it can be inhabited and used for events. As long as it is inhabited, it cannot be taken by the antiquated Ottoman land laws—another tool used to rescind Palestinians’ property rights after they are driven off their land.

The bizarre set of circumstances that have made Al-Ma’sara, a rural village of about 900, one of the front lines in the battle against Israeli expansionism are sadly familiar to most Palestinians and their international and Israeli supporters. Although the village lies roughly 10 kilometers west of the 1948 “Green Line” (the only internationally recognized ‘border’ between Israel and Palestine) the massive “Gush Etzion block” of seven Israeli settlements (pop. 60,000) lies nearby, products of Israeli’s campaign to produce illegal “facts on the ground.”

These ‘facts,’ in turn are used to justify giving the Israeli military full control of most of the village’s lands and the annexation of thousands of dunums of land via planned Wall construction.

Not only would the wall’s route cut off 3500 dunums of Palestinian lands in Al-Ma’sara and limit access to services in larger communities, but it would also cut off the village’s water access and the primary routes between Hebron, Bethlehem, and Ramallah—three of the largest cities of the West Bank.

Any one of these developments would hit Al-Ma’sara and surrounding villages hard, but together they are intolerable and demoralizing. Even though there is no barrier or construction currently underway, some Palestinian farmers have chosen to stay off lands east of the Wall’s projected path, fearful of settler and military attacks. Others, however, have decided to resist—using the Tayatqa house as a focal point.

When asked what his vision for the house is, Zwahre describes a vibrant social and information center, with Palestinian flags flying and walls painted red, green, white and black. From terraces, he imagines people sitting to drink tea and looking across olive groves and fruit orchards. Farmers avoiding their land below the settlements for fear of attacks by settlers would feel safe working on it. But, he adds, that is just his vision, and it is for all those involved in the development of the center to create it.

The Popular Committees have issued a call for supporters to join them in making this center a reality. They can be contacted at www.popularstruggle.org. Weekly protests against Wall construction are held Fridays at noon, starting from the Al-Ma’sara city center.