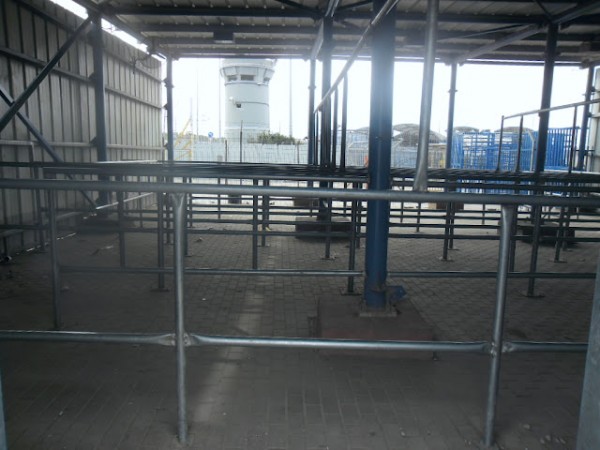 This morning at 9:30 AM a group of about 100 demonstrators arrived at Meitar carrying banners, flags and pictures of loved ones held in Israeli prisons. The protesters made speeches and chanted slogans calling for freedom for political prisoners and for Prisoner of War and political recognition from the International Committee of the Red Cross (ICRC), which is charged with upholding International Human Rights Law in times of peace and war. From the beginning Israeli border police surrounded the peaceful demonstration, and as the group approach the border terminal, they began shoving. Despite this aggression, after one and a half hours the demonstration ended peacefully.

A young Palestinian woman named Fadwa told ISM that to visit her brother Jihad, who has been held in Israeli prison for a decade, she must make a 12-hour journey involving strip searches and extensive interrogation at Meitar only to be repeated again at the prison. She recalls that several times she has been forced to leave her shoes and jacket in the interrogation room and pass through the checkpoint barefoot, even in cold weather.

Ranna, whose husband Yasser has been held in Rimon prison in the Naqab for nine years, recounts a similar story of humiliation by Israeli border authorities. When arresting her husband, Israeli soldiers beat him so severely that he lost his right eye, and they refused to tell Ranna where he was to be held or what his charges were. Now she, along with her three children, must endure an ordeal like that of Fadwa, when visiting her husband in Rimon. Ranna says it is not only she that has been strip searched, but “women of all ages, even old women.”

Approximately 5,000 Palestinian prisoners are held in Israeli prisons, the vast majority in contravention of international law which prohibits the transfer of a people from occupied territory to the territory of the occupier (within Israel’s 1948 boundaries). Many of these were never formally charged or given access to legal defence. Palestinian prisoners and solidarity groups have been organising to protest Israel’s systematic abuse of Palestinian prisoners, which has been thoroughly documented by human rights organisations like B´Tselem, Adameer, Amnesty International and Human Rights Watch.

Soldiers at the Meitar checkpoint, along with forcing hundreds of families to endure extensive delays, interrogations and intrusive searches, have recently begun strip searching female relatives also, which the women fear is being videotaped. That this humiliation follows mass hunger strikes and other prisoner organising, has led activists such as Amjad Najjar (media spokesperson for the Prisoner Society) to decry this harassment as “collective punishment,” not only of prisoners but also of their support network. The Prisoners Society plans to continue staging protests at Palestinian ICRC branches (including Khalil) until their demands for compliance with international law are met.