New
Home / Reports / “We die a little bit inside us each time”: 2 more homes demolished in Bedouin village of Umm Al Kheer

“We die a little bit inside us each time”: 2 more homes demolished in Bedouin village of Umm Al Kheer

Israel demolished the homes of two families in the Bedouin village of Um Al-Kheer in the South Hebron Hills last week, on Wednesday January 25th. 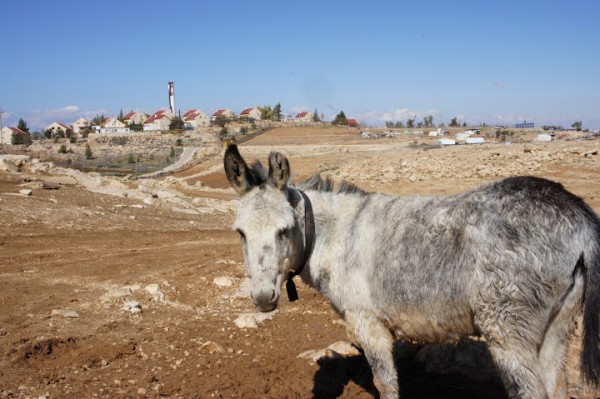 An international observer for the Ecumenical Accompaniment Programme in Palestine and Israeli (EAPPI) who arrived on the scene later the same day, described hearing the news as “the message we had feared for two months.”  A video from later that Wednesday can be found on the Norwegian-language blog, showing  village residents searching through the rubble, looking for belongings.

Um Al-Kheer is a so-called “unrecognised village” of 150 people, situated next to the settlement of Karmel. Its Bedouin residents originally settled in the village after they had been forced out of the Neguib (Negev) in 1948.

One of the houses belonged to a widow and her nine children, who was left crying for their lost home. The second house was home to a young couple and their three children.

Um Al-Kheer has been repeatedly subject to Israeli house demolitions. The events of January 25th were the fourth such assault on the village since February 2007 and brings the number of Israeli demolitions in the tiny village to a total of sixteen houses and one restroom. The most recent previous demolition was in October 2011.

Village resident Eid Suleymann said of the demolitions, “We die a little bit inside us each time.”

The primary reason for the demolitions is the adjacent settlement of Karmel. Part of the Israeli excuse for the demolitions is the security of the settlers,  but residents feel that the actual purpose is to  “clear this area of people”and to expand the already-growing settlement into it. This settlement is considered illegal under international law.Only a few metres away from the village and the rubble of the house, house construction can be seen under way in Karmel. Several cranes and newly or partly built houses are clearly visible.

While the story of Um al-Kheer is one of tremendous suffering and of inhuman and racist behaviour on the part of the Israel state, it should however also be regarded as an outstanding example of  endurance and solidarity. A temporary metal shack has already been constructed to house the widow and her children. Palestinians and Israeli activists from Ta’ayush worked through the rain on Saturday January 28th to begin rebuilding of the houses’ stone walls.

Tom is a volunteer with International Solidarity Movement (name has been changed).