As one of the co-founders of the International solidarity movement (ISM) I often refer to ISM as my first baby. Well, my first baby is now an independent unruly and uncontrollable ten-year-old and I am one proud Mama. But I am one of ISM’s many proud Mamas (some of whom are male). For a movement to come into existence it needs to be a vision shared by hundreds or thousands of people who find an opportunity to come together and make it happen. In truth ISM has hundreds of co-founders, and only few of us have been acknowledged. 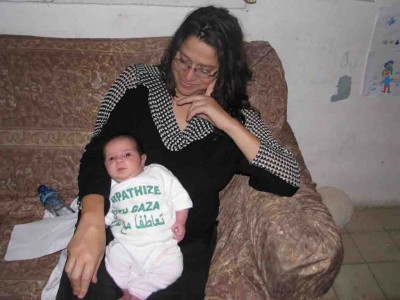 There is a word in Arabic, Nawal, that means a deep wish that is fulfilled. ISM is one of my Nawals and I am proud and grateful to have had the opportunity to take part in its birth. Now, more than ten years later it is obvious that ISM has a life of its own, independent from any of us that were involved in its beginning. This is the one of the sources of my pride in the movement and there are many. I would like to name a few:

Those of us who where involved in the birth of the movement know that we were making it up as we went along. We still are! ISM is constantly changing, adjusting and reinventing itself. In the first official ISM campaign in 2001 we had a small group of about 30 activists from around the globe and a forty person Italian activist delegation organized by the legendary Luisa Morgentini. Among us we were blessed to have Linda Bevis and Ed Mast from Seattle who had been involved in the then flowering global justice movement. Our mentors from the Christian Peace Makers Team that included Le Anne Clausen and Rick Polhamus coached us in the principles of consensus decision making. Linda and Ed made sure to show us how to apply those principles to all levels of our organizing and decisions taken during the campaign.

The flat, non-hierarchical structure that we adopted early on has proven to be key in the movement’s growth and survival. The Israeli authorities have tried to chop off ISM’s head several times by imprisoning, deporting and denying entry to people they consider leaders of our movement. They seem unable to understand that our movement does not have leaders.

We of course do have experienced and inspiring activists but from the outset in ISM being a hero on the field, or in your field, did not make you a leader, and when it came to making decisions everyone had to sit through the meetings with everyone else or accept the group’s decision. We do still occasionally face problems when people translate their role or position in the movement into power over others, but I am happy to say that ISMers generally don’t put up with that for very long.

As ISM has matured, more often than not, the principle of non-hierarchy is applied and we enjoy a working environment free (or almost free) of power struggles. This structure and the flexibility that it has afforded us has not only allowed us to weather the frequent turn over that results from the occupation’s policy of denial of access, it has also made ISM a structure of empowerment for the thousands of activists who have worked with and through ISM.

The Palestinian people have been engaged in popular struggle since the colonization of Palestine began. Palestinians do not need anyone to tell them what to do, teach them how to do it or to save them but often, they do need our support – and that is what ISM is here for. The call from the Palestinian activists to us has never been clearer. We are called on to engage in and promote Boycott Divestment and Sanctions of Israel (BDS) and to counter Israel’s attempts to isolate the Palestinian people by breaking the siege and coming to Palestine via water, air and land. The siege has taken its most brutal form in the besieged Gaza strip but it exists in a less complete version in the West bank, to which access is severely limited. While in Palestine we are invited to witness and to join in Palestinian popular protest and to carry Palestine’s message back to our home countries.

As I write these words the Arab revolutions and the Occupy Wall Street movements are once again proving the potential of leaderless mass mobilization. It saddens me that in the global solidarity movement with Palestine, some experienced activists, some of whom grew up as activists in ISM, disregard these principles and have fallen back on the old fashioned vertical politics of top-down coalitions, charismatic leaders, and a version of professional activism where experience is used as a tool to withhold power rather than something we have a responsibility to share with others.

The last principle I will mention that ISM is organized around is that we participate in non-violent popular struggle – a form of resistance in which every one and not just a select trained and armed group of people can engage. We did not invent any of these principles. But we were fortunate and smart enough to learn and adopt them and by doing so ISM has set a standard and an example of what solidarity can be.

Neta Golan, an Israeli citizen and a founder of ISM, lives in the West Bank town of Ramallah with her Palestinian husband and three daughters – an illegal act under Israeli apartheid law.