“I have constant pain in my head, eyes and ears. I have been having nose bleeds for the past three years. I can still feel the shrapnel move inside my brain” 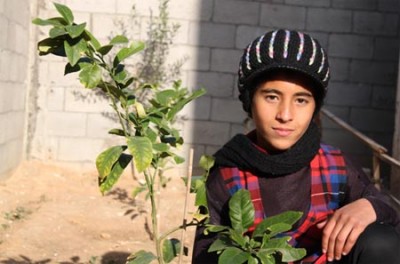 On 4 January 2009 at around 6:00 Israeli forces surrounded the house where Amal al-Samouni (11) and 18 members of her extended family were sheltering, in Zeitoun neighborhood east of Gaza City. Israeli soldiers ordered the owner of the house, Amal’s father Attia al-Samouni (37), to step outside with his hands up. Upon opening the door he was immediately killed by shots to the head and chest. Soldiers then started firing bullets into the house, killing Amal’s 4-year old brother Ahmad al-Samouni and injuring at least 4 other people, of whom 2 were children.

Over the following hours, soldiers ordered over 100 other members of the extended al-Samouni family into the house of Wa’el Fares Hamdi al-Samouni, Amal’s uncle. On 5 January 2009 Israeli forces directly targeted the house and its vicinity, killing 21 persons and injuring many others. Amal, who was inside, was wounded by shrapnel to the head and buried under the rubble, lying between injured, dying and deceased relatives. On 7 January ambulance personnel, who were prevented from entering the area until then, evacuated her to hospital.

Between 4-7 January 2009, 27 members of the Samouni family were killed, including 11 children and 6 women, and 35 others were injured, including Amal’s twin brother Abdallah.

Amal survived those 4 horrific days but is left with permanent injuries and trauma. “I remember my brother and father and how they were murdered in every moment,” says Amal as she thinks back on the attacks and the three days she spent buried under the rubble of her uncle’s house without food or water. Amal does not need a lot of words to express how she feels: “before, we used to live together as a happy family. Now I don’t feel happy anymore.”

Amal did not only lose her father; the family’s home was also destroyed by the army. “For one year we lived with the parents of my mother, in Gaza’s Shaja’iya neighborhood. Then we lived in a storage room for 1.5 years. It didn’t have a floor. There was just sand. Since 6 months we are living where our old house used to be. It is not even half the size of our old home. I didn’t want to return to our neighborhood because of what happened. My family didn’t want to either but we had no choice.” Like many other members of the al-Samouni family, Amal’s household now receives some help from relatives living in their neighborhood, but is still struggling to manage financially. The living conditions of Amal and her family have somewhat improved over time, although the house still lacks equipment like a refrigerator, washing machine, and a closet for the children’s clothing. Amal’s father, Attia, was a farmer. He grew vegetable crops on a rented plot, which used to provide the family income.

As the reconstruction of life and livelihoods continues in the al-Samouni neighborhood, Amal continues to struggle with her injuries. The pieces of shrapnel embedded in her brain cause her severe pains. “I have constant pain in my head, eyes and ears. I have been having nose bleeds for the past three years. I can still feel the shrapnel move inside my brain,” she says. Local doctors say it would be too dangerous to remove the pieces, but Amal cannot accept this quite yet. She has a strong wish to travel abroad to see a doctor. “I want to be sure about my situation and have another doctor look at my situation. I want to try everything possible to end my problem and pain. Other children are sometimes able to travel for fun. My wish is serious; I won’t travel for amusement but for medical treatment.”

The continuous pain has a profound impact on Amal’s mood, her relationship with her siblings, and her performance in school. “When I have a lot of pain I become nervous and angry.” Her mother Zeinat (38) adds that “she then easily becomes angry with her younger siblings and beats them. Recently she and I visited a hospital again to see how she could be helped. The doctor prescribed tramal [a sedative] but I will not allow her to take medicine like that.”

“When I am sad I go to my aunt’s house to see my cousins, or I prepare my books for school,” says Amal. “Before the war I was excellent in school. Now my scores are not so good anymore.” While speaking of her dropped scores Amal becomes very emotional. The teacher told her mother that Amal is not able to focus in class. This semester Amal failed two subjects. “I have pain in my eyes when I look at the blackboard,” Amal says, very upset. Despite her difficulties in school, Amal knows what she would like to study for: “when I am older I want to become a pediatrician and help to treat wounded people.”

PCHR submitted a criminal complaint to the Israeli authorities on behalf of the al-Samouni family on 8 May 2009. To-date, only an interlocutory response has been received, noting receipt of the complaint. Despite repeated requests, no further information has been received.