Susiya continues to pave the road despite Israeli settlement activity

One 17 year old boy from Yatta, Khalid Al Hurush, was arrested during a peaceful action in Susiya, and several people were beaten by the Occupation Forces on December 3rd, 2011. On Saturday at 10 AM, around 60 demonstrators gathered in Susiya to demonstrate against demolition orders. They proceeded towards  a road  process of being constructed in the area by the local villagers and decried a demolition order against a newly built school. 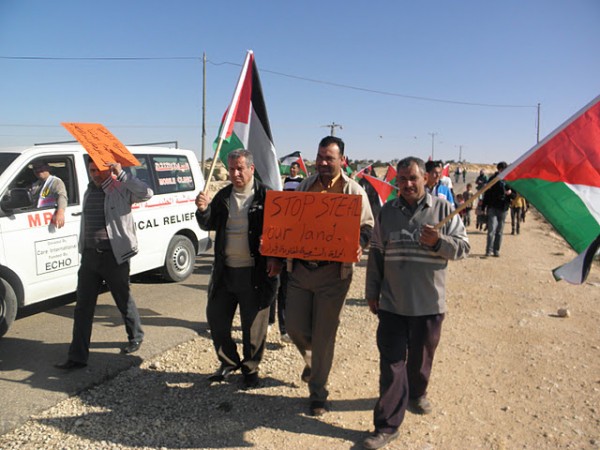 The demonstrators walked to the new road in Susiya chanting in Arabic and in English against the land grab, expansion of the settlements, and the intensified demolitions in the South Hebron Hills.

Several protesters saw the Occupation Forces beat Khalid Al Hurush inside the jeep after being handcuffed. He was directly taken to Kiryat Arba where he was accused of interrupting police work and destroying a part of a military jeep during transportation. On December 4th the 17 year old was transferred to the Russian Compound, a prison, in Jerusalem.

A protester from the area commented on the arrest, “It seems that the young boy was arrested and was beaten up in the custody of the Occupation Forces in order to scare him and other protesters from demonstrating against  Israeli Occupation.”

After the arrest the protesters continued to work on the part the road for several hours.

Susiya has been exposed to a wide range of demolitions since 1991, but due to the steadfastness of the Palestinians in the area, every time a demolition takes place, the citizens of the area rebuild a shelter for to protect the land from being colonized by illegal, Zionist settlers.

Aida Gerard is a volunteer with the International Solidarity Movement (name has been changed).