“When I wake in the morning the first thing I do is remember my children.  I come and sit outside and picture them where they used to play. I don’t want to go out and interact with other people anymore. I largely stay inside the home” 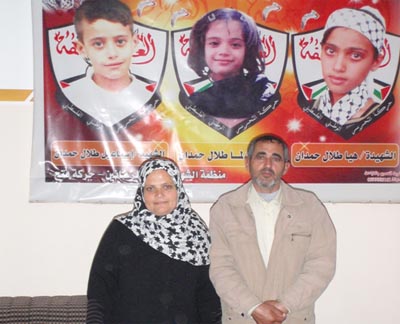 Iman and Talal Hamdan standing in front of a picture of their killed children Hiya, Lama and Ismail (Photo: Palestinian Center for Human Rights)

Talal Hamdan, 47, and Iman Hamdan, 46, are quietly contemplative about life since the loss of their three children Haya, Lama, and Ismail. The children were aged 12, 10, and 5 respectively, when on the morning of 30 December 2008 an Israeli F-16 dropped a bomb in the area they were walking in Beit Hanoun, killing all three. The children were walking with their father to a nearby rubbish site to drop off household waste when Israeli forces targeted the area. The children were the youngest of the couple’s children, and they have not had any other children since the attack.

Though none of the previous three years have been easy on the couple, for Iman the hardest period was directly after the attack, when she found herself in deep shock. “After the death of my children I could not cry, I did not have the space to properly mourn them,” says Iman, “but when I finally became alone. I couldn’t stop my tears.” Iman believes the shock of the incident has greatly increased her physical health problems, which include severe back and leg pain. “I barely sleep at night, maybe two hours during the day,” says Iman. Her grief is compounded by the experience of losing her father, brother and two cousins all on the same day during the first intifada.

Talal’s life has also been completely changed since the death of his children. “When I wake in the morning the first thing I do is remember my children. I come and sit outside and picture them where they used to play,” says Talal. “I don’t want to go out and interact with other people anymore. I largely stay inside the home.” Talal had a very close relationship with Ismail, “he would beg me to take him everywhere with me and so I would take him, we were always together.” Relating how the memory of his children is so painful, he gives an example of the time he was sick and needed to go to the hospital, “this particular hospital was the one the children were transferred to before they died. When I walked in the memory of my three children lying dead next to each other came back to me and I started to cry. The doctors first thought I was afraid of injections, my family had to explain to them what had taken place, and why I was so upset. In the end I couldn’t stay in the hospital for the treatment.”

Contemplating the approach of the upcoming anniversary, the couple speak about how they will face it. “On the day of the anniversary I will try to keep myself busy to avoid thinking about it too much” says Iman, “but I don’t visit the graves, I couldn’t bear it”. The couple now have young grandchildren living with them, one of whom is named Ismail after their killed son. “We try our best to make up for our loss with Ismail, we go up and see him and spend time with him every morning,” says Talal.

Before the attack Talal had worked in construction. He tried to return to work after the attack, but nerve damage in his legs and arms as a result of the attack have left him unable to continue working. The family now survive on UN food aid and help from their two sons.

Regarding the future the family has hopes and apprehensions. “We are always afraid that an attack will take place again resulting in more deaths in the family. I am always calling my daughters to tell them to take care of themselves and the children” says Talal. “I hope that peace will prevail and that we will return to calm eventually. Most of all I hope that other children are not killed in similar incidents. I can understand when adults are killed during war but I cannot understand when children are killed.” Regarding the family’s legal complaint following the death of their children, Talal is positive. “I expect it to be successful, my children were not militant and there were no military targets in the proximity.”

PCHR submitted a criminal complaint to the Israeli authorities on behalf of the Hamdan Family on 21 July 2009. To-date, no response has been received.