“Living under occupation means that whatever hopes we have, it will fall apart one day. For example, you bring up your child and put all of your hopes in him or her, but then they come and kill your child and all your hopes are destroyed.” 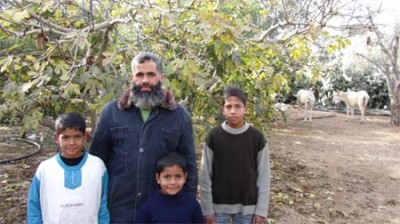 In the early morning of 28 December 2008 Mahmoud Abu Taima, his wife Manal, and their two oldest sons, Khalil and Nabil were collecting zucchini from their lands in Khuza’a village, east of Khan Younis. After a few hours the two brothers went to their uncle’s farmland a few hundred meters further west. At around 8:30 the Israeli army fired a shell from the border fence which landed between the two boys. Nabil (16) was killed and Khalil was critically injured.

“You must understand, the area was very calm. Many farmers were working on their lands. It is an open area. I saw a projectile coming from the border fence towards the farm lands. Then I heard the explosion. I immediately ran towards the place of impact because I knew my sons were in that area. By the time that I arrived, people had already put the boys on a donkey cart to bring them to the hospital,” recalls Mahmoud Abu Taima (40). Khalil was critically injured by shrapnel in the chest and limbs and underwent a life saving surgery immediately after arriving in the hospital. “While we buried Nabil we were expecting that they would bring Khalil’s body from the hospital too,” says the boys’ mother Manal (37).

The Abu Taima family, who have their home in Abasan village, east of Khan Yunis, has been traumatized by the death of their son and brother Nabil. His parents, and 6 eldest siblings Khalil (20), Naima (18), Isra’ (15), Mohammed (14), Abdel Rahman (9), and Ibrahim (6) all have dear memories of him. “Nabil was a part of us and he had a big place in my heart. I remember him in every moment and I feel that he is present with us. Like now, when I drink tea, I remember him and feel that he is present. When I eat my meals I feel as if he is still here with us. I can never forget him,” says his father Mahmoud.

“Nabil’s mind was older than his age,” says Manal, “he was very clever at school and all of his teachers and the students liked him a lot. On the anniversary date of his death, his teachers and friends come to visit us. Besides going to school, Nabil liked to breed rabbits. Until his death we had about 50 rabbits. Since his death they died and we stopped getting new ones. We don’t feel like it anymore, now that he is not here.” Ibrahim (6) and Abdel Rahman(9) had a very close relationship with Nabil.  Manal says: “They were badly affected by his death. They wanted to take the shovel and open his grave so they could take him from his grave and bring him to a doctor for treatment. Ibrahim was upset and stressed for a long time so I took him to a psychologist. When I told the children that a human rights organization was coming to talk to us Ibrahim asked me if they would bring Nabil.”

Khalil has spent the past years trying to recover from his physical injuries. “After 3 days I was transferred to Egypt for additional surgery. In the months after that I went to Médicines sans Frontières after finishing school and had 3 hour sessions of physiotherapy. I had very long days. Despite everything, there is still shrapnel inside my legs, chest and arms which cannot be removed.  There are places in my left leg in which I can’t feel anything. My ankles always hurt and I can’t move the way I did before. My mobility, including my walking, has been affected. I can’t do everything that I want. For example, nowadays I play football alone because I am too afraid someone will hit my leg and I will be in agony.”

Besides his physical injuries, Khalil is trying to deal with the loss of his brother and the trauma of the incident. “We would always go to school and other places together. I feel as if I lost a part of my body. It is difficult to continue my life without this part. During the war it was my ‘tawjihi’[final high school] year and I had to go to school. I was traumatized after the incident. When I was sleeping I could hear the sound of a missile coming towards me. Somehow, I passed the tawjihi that year and am in university now.” Manal adds that Khalil used to have panic attacks after the incident, “even the sound of birds could make him have a panic attack.”

A few days after the attack, Israeli bulldozers destroyed the farmland belonging to the Abu Taima family, approximately 700 meters away from the fence. “We had zucchini crops, and a small storage room for fertilizers and equipment. We also had a water pump and water irrigation network. It is all destroyed now. We were unable to go to our farm for 2 years as it was too dangerous. Now we go again, despite the Israeli army shooting towards us. It is difficult. Since the death of my son I lost my motivation to work in the land,” says Mahmoud.

Mahmoud does not dare to have hopes or expectations for the future anymore: “living under occupation means that whatever hopes we have, it will fall apart one day. For example, you bring up your child and put all of your hopes in him or her, but then they come and kill your child and all your hopes are destroyed. We try to think about the future and have long-term hopes but it’s not possible for us.”

The family is not optimistic of the chances that they will see a court case against those responsible for their son’s death. “Nabil was not the first and last one who was killed by the army. Many boys like him were killed. Even if they [Israel] can capture the soldier who fired the shell, they will say he is insane,” says Mahmoud.

PCHR submitted a criminal complaint to the Israeli authoritiess on behalf of the Abu Taima family on 2 July 2009. To-date, no response has been received.