“I miss them all the time, sometimes I even go to look for one of them in the house in the split second before I remember they were killed” 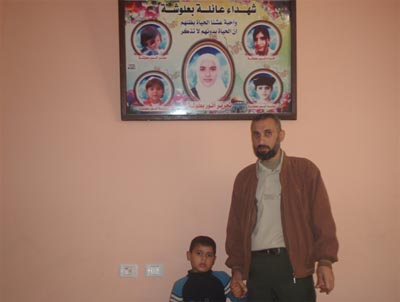 At around 00:00 on the 29 December 2008 an Israeli aircraft attacked the Imad Akel Mosque situated in Jabaliya refugee camp. The attack destroyed the home of Anwar and Samira Balousha, which was situated just three metres from the mosque. Five of the family’s eight daughters were killed as a result of the bombing, which caused the family home to collapse on top of them as they slept. Five others were injured in the incident and other homes in close proximity to the mosque were completely destroyed.

In the main room of the reconstructed Balousha family household stands a portrait of the family’s five deceased daughters Tahreer, Ikram, Samar, Dina and Jawaher who were 18, 15, 13, 8 and  4 respectively at the time an Israeli F-16 dropped a bomb on the Imad Akel Mosque, 3 metres from the family home. The family have since had one new comer to the home, Tahrir (named after her deceased sister); but for father Anwar “the home still feels empty, it is like there is gaping hole where my daughters once were, and despite feeling their presence with us all the time there is a huge sense there is something missing”.

While his face and composure gives little away in terms of the suffering his family has gone through, Anwar’s words are clear regarding the effect the incident had on himself and his family. “My wife has been badly affected, just yesterday there was an UNRWA crew demolishing the wreckage of one the neighbours’ homes destroyed in the war to make room for its reconstruction, it reminded Samira of the war and she started to cry”. Anwar himself says he spends a lot of time at the daughter’s graves talking to them about daily life’s small comings and goings, “I miss them all the time, sometimes I even go to look for one of them in the house in the split second before I remember they were killed”.

The families remaining children have been traumatised. Anwar describes how Iman, 20, who had a very close relationship with her older sister, Tahrir, and who watched her sister Dina die in her arms following the attack, seems often to be lost in her own thoughts; “sometimes I call her but she cannot even hear me” says Anwar. Despite being very intelligent Iman’s grades have suffered as a result. He also fears that his son, Muhammad, who was recently treated for a shrapnel wound in his foot, suffered during the attack, will grow up wracked by feelings of revenge for the death of his sisters. “He speaks of them constantly”, says Anwar, “he will not forget”. When asked by his father about his sisters, Muhammad says that “my sisters were murdered by the Israeli’s, they are in Paradise”.

The three years since the attack has been a period of constant flux and displacement for the family. They have had to move home seven times in the past three years, each time creating a greater sense of instability for the family’s remaining children. “The children find themselves friendless each time they move area”, says Anwar, “my son Muhammad wanders off back to the neighbourhood of his old homes or to the local UNRWA school in search of friends, we can’t find him for hours and when he eventually comes home he says he went to find friends to play with”.  They have only recently returned to their rebuilt home that was destroyed during the attack.

Regarding hopes and fears for the future Anwar has mixed feelings. He is hopeful for the family’s legal case in Israel but he says “if they bring me all the money in the world they could not compensate me, I want my daughters, not money”. He is ravaged by fear for his children every time there is bombing and fears that he will lose them in the future. “Though this is my home I am seeking a future outside Gaza, right now I want to leave to make a new life for me and my family”.

PCHR submitted a criminal complaint on behalf of the Balousha Family on 2 August 2009. To-date, no response has been received.