“For the upcoming anniversary of the war, me and other women who lost husbands in the attack plan to give gifts to orphans who lost their fathers during the war. The gifts will be inscribed with the words ‘On this day you are the beloved ones of your mother’. We want children to remember they still have their mothers and they will always love them” 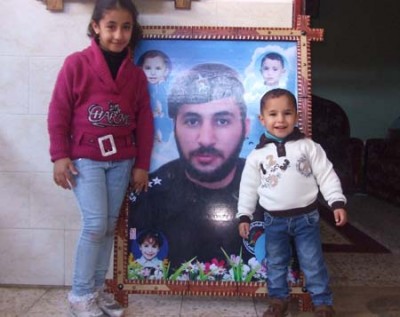 Khawla and Faris Al Ashi photographed next to the picture of their deceased father. (Photo: Palestinian Center for Human Rights)

On the morning of 27 December 2008, at approximately 11:30, Israeli F-16’s targeted a Gaza police initiation ceremony being held in the forecourt of “Arafat City”, a government complex located in Gaza City. The attack resulted in over 60 deaths and 150 injuries.  This incident formed part of the wave of attacks which marked the commencement of Israel’s 23 day offensive on the Gaza Strip codenamed “Operation Cast Lead”. Amongst those killed was 33 year old Faris Al Ashi, a member of the Gaza police force who was on duty at the time of the attack.

Like many of the wives who lost husbands during the offensive, Amna Al Ashi was left with sole responsibility for bringing up her and her deceased husband’s young children, Khawla, 6, Osama, 5, Yomna, 3, and Faris, 2, whom she was five  months pregnant with at the time of the attack. Amna’s reaction to her challenging circumstances has been defiant, “I am a woman and I have the right to live my own life, many men have proposed but I choose to dedicate myself entirely to the cause of my children”. Discussing the last three years of her life, Amna is keen to press upon the mini victories that have kept her going along the way.

It is clear that Amna has thought carefully about the solutions to the problems faced by her children following the loss of their father. “After he lost his father Osama was very traumatised”, says Amna, “he didn’t want to interact with others and he developed speech problems as a result. Even though he was very young I enrolled him in a local martial arts course. At first he didn’t not want to go, but slowly he gained confidence and now he is an orange belt and has overcome a huge amount of his shyness”. Likewise, Amna has found a novel means to allow her children to express their trauma. “I registered Osama and Khawla in a course for movie animation. Of course their movies are based around their lives and those of their siblings and reflect a lot of what they are thinking and feeling. The movies give me an insight into their problems and allow me to talk with them about it”. She plans to enrol all the children in traditional Palestinian Dabka (Dance) classes to make sure they grow up strong and healthy.

Nevertheless, Faris’ killing has left an empty space in the family life of the children and Amna . “My children see their cousins with their fathers, they hear them calling him “Baba” and they are deeply aware of the absence of a relationship with their own father” says Amna, “sometimes I try to make up for this by getting them to call me Baba, but it’s not the same, they need the feeling only their father could give them”. The loss of her husband has also led to feelings of loneliness and isolation for Amna. “During the day I am strong for the children but at night I become weak, I need the arms of Faris, I need everything he gave to me”.

Amna describes the initial year after Faris’s death as being the most traumatic. “At first I had huge trouble sleeping. The problem thankfully improved but I still find it difficult at times to sleep at night”, says Amna. One way Amna has looked to keeping her outlook positive is to keep busy on projects and hobbies. “I want to keep myself busy with good goals for my life. Currently I’m busy setting up a Kindergarten, which I have already received funding for.” “For the upcoming anniversary of the war, me and other women who lost husbands in the attack plan to give gifts to orphans who lost their fathers during the war. The gifts will be inscribed with the words “On this day you are the beloved ones of your mother”. We want children to remember they still have their mothers and they will always love them”.

During the offensive, Israel illegally classified members of the civilian police force as combatants: this classification constitutes a wilful violation of the principle of distinction, a key component of customary international law. Hamas is a multi-faceted organisation, exercising governmental control of the Gaza Strip. As an organisation, it cannot be considered an armed group. Rather, a distinction must be made between Hamas’ armed and political/civil components. The Izz ad-Din al-Qassam Brigades are the military wing of the Hamas organisation, they are an armed group, and are considered combatants according to IHL. However, Hamas’ political and civil wings are comprised of civilians, who are legally entitled to the protections associated with this status, provided they do not take an active part in hostilities. Civil police, and governmental officials cannot be considered combatants. Attacks intentionally directed against these individuals constitute wilful killing, a grave breach of the Geneva Conventions, and a violation of customary international law.

PCHR submitted a criminal complaint on behalf of Fares Al Ashi on 5 May 2009. To-date, no response has been received.