Three Palestinians were arrested and others were detained, beaten and pepper sprayed by the Israeli military in Al-Walajeh yesterday, as villagers attempted to prevent the detonation of explosives used to widen the route for the separation wall on the village’s land.

Previously, large explosions on 3 November2011 in the village had sent large rocks several metres into the air, damaging nearby houses and trees and endangering life.  The explosions have damaged the foundations of nearby properties.  Yesterday, protesters attempted to peacefully prevent a similar explosion from taking place. 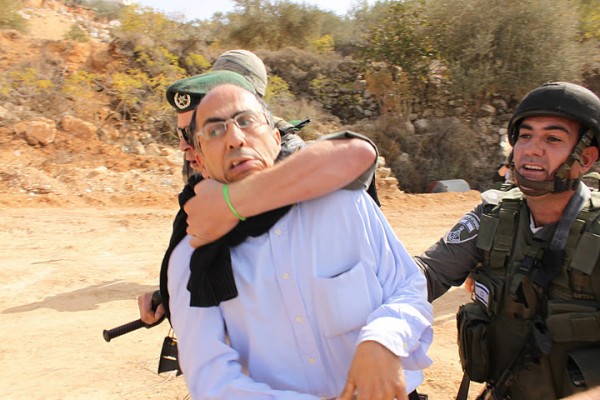 At around 8am yesterday morning, villagers from Al-Walajeh, near Jerusalem, were working on an UN project to enlarge the village’s graveyard at the Western side end of the village.  They discovered that the Israeli military and contractors were laying charges to explode rock and widen the path for the construction of the separation barrier on the village’s land.  The barrier will completely encircle Al-Walajeh if completed. Access will be gained via a tunnel and checkpoint, manned by the Israeli military and open for a limited time each day.

A man from Al-Walajeh, who gave his name as ‘Abu Sultan’, explained that  he “was the first to arrive at the scene– 10 days ago the officer of the DCO [District Coordination Offices] told us that they were not allowed to make any more explosions, and that if they tried we should stay on the land and prevent it – so the DCO should stand with us.”

Abu Sultan tried to take the dynamite from the ground but was pepper sprayed and detained for over 3 hours before being released. Another villager, Mustafa Odeh, was beaten and arrested by soldiers.

Another man, who did not want to give his name, was also pepper sprayed when he attempted to peacefully prevent the soldiers laying the charges.

“The soldiers told us to leave and they pushed us as if we were sheep.  Without warning, they grabbed pepper spray and sprayed my eyes and mouth. I was taken to hospital where they washed my eyes and gave me oxygen.  The soldiers prevented the ambulance reaching me, two men had to carry me…It still burns [five hours later] on my face and around my mouth, and  it is difficult to breath. I am very upset and angry.  I’m an old man and the soldiers are young boys, it is very disrespectful behaviour.”

After the men discovered the military laying charges, villagers gathered to demand that they cease their agenda. By 11:00 AM a crowd of around 30 Palestinians and several international observers and journalists had gathered at the site of the charges.  At 11:20 AM approximately 20 Israeli soldiers and contractor security guards began to roughly push and barge the crowd up the hill, away from the site.

Protesters voiced their disapproval but offered no physical resistance; however, the Israeli military became increasingly violent.  After attempting to grab and arrest some Palestinian protesters, several people tumbled down a steep verge; one Palestinian, his face streaked orange with pepper spray, was arrested, while another fled the scene.  The military deployed pepper spray and began to strike the peaceful demonstrators.

Sheerin Alaraj, a popular resistance activist from Al-Walajeh was pepper sprayed and blood ran from a cut on her face.  A 38 year old woman, ‘Nadia’, was pepper sprayed in the face and was also taken to the hospital after losing consciousness.

The Palestinian academic Mazin Qumsiyeh was also on scene filming the protest.  He was arrested and dragged to a nearby military vehicle by the Israeli border police.  A witness, who did not want to be named, stated that “Mazin was filming with his video camera and the soldiers wanted us to retreat.  They could have asked us to retreat but they just singled him out. It was intentional.  I was next to him, doing the same thing, and they didn’t want to arrest me.”

An Al-Walajeh resident, who gave her name as “Fadwa,” said that the Israeli soldiers “have to be more human and understand our feelings, they can’t just cause explosions.  They said that the explosion today would be small, but you can’t trust them.”

After soldiers had cleared the area, they fired two tear gas canisters across the valley where only some women and small children were visible.  At around 12:30 PM they detonated a single charge, sending a cloud of rock and debris high into the air.  Bulldozers then began work to clear the shattered rock for the path of the wall.

Residents of Al-Walajeh said that although the explosion today was relatively small, it was still carried out within a few metres of the village’s graveyard and several olive trees.  Previous explosions have damaged foundations of nearby houses.

A resident, who lives near to the proposed route of the wall, said that the explosion on 3 November 2011 endangered life in the village as the blast sent large rocks a distance of several hundred metres.  Some rocks were around30 cm long, weighing several kilograms;

“Stones fell right beside my uncle’s house.  When they make explosions it’s like an earthquake, the house shakes.”

Four explosions had taken part in this area of Al-Walajeh in recent weeks, and there have been explosions to clear debris for the wall in other parts of the village.

A woman from Al-Walaja, who did not wish to be named, said that the explosion on 3 November threw large rocks several metres into the sky.

“Stones fell onto my house; the children were in the house and were very scared.  Plants and olive trees were damaged on my land.”

The DCO (the Israeli body responsible for coordinating administrative activities in the occupied territories, including construction) was unwilling to provide a reaction to yesterday’s incident.

Following the Six Day War in 1967, much of Al-Walaja’s land was given to the nearby Israeli settlements of Gilo and Har Gilo, which are considered illegal under international law.  A 2011 report by the UNRWA (United Nations Relief Works Agency) revealed that private investors announced plans in 2004 to build an additional settlement called Givat Yael, consisting of 14,000 housing units.  This settlement would expropriate around 60% of the territory of the West Bank part of Al Walajeh.

Israel claims that the separation wall is necessary to prevent attacks on its territory.  However, in its detailed analysis of the Israeli legal justification of the wall, the International Court of Justice  found that the conditions necessary to justify the movement restrictions imposed by the Barrier were not met.  Work began on the wall in Al-Walajeh in April 2010 and has progressed at a furious pace, with significant sections of concrete, several metres high, now in place.  Residents estimate that, at the current rate of construction, the wall will be completed in 2012. Rather than following the Green Line demarcating the West Bank, the proposed route of the wall in Al-Walajeh cuts deep into the village’s land.  According to the UNOCHA (United Nations Office for the Coordination of Humanitarian Affairs), between 4-5000 dunums (1 dunum =1000 square metres) of Al-Walajeh’s land lies outside the route of the wall.

If the wall is completed, and the village is entirely encircled in concrete walls and metal fences, the restricted access to the village will drastically curtail normal life in Al-Walajeh as over 2000 inhabitants will be prevented from travelling freely to work or to access essential health and education services.