Hebron copes with self deifying Israeli military and its settlers

The streets of Tel Rumeida are locked-down and divided; physically occupied by a forceful Israeli military.  For the Palestinian community living in this part of H2, Israeli-controlled Hebron, military occupation is an inescapable intrusion into everyday reality. The existence of an estimated 500 Israeli settlers is facilitated by up to 4000 Israeli soldiers stations in Hebron. Grey, austere watchtowers gaze over streets in which Israeli soldiers and military vehicles are stationed at regular intervals, frequently stopping Palestinians as they walk through their own neighbourhood to demand they prove their identity.  Those wishing to travel into H2 from Palestinian-controlled H1 must pass through metal detectors and checkpoints, where they may be arbitrarily harassed or detained by bored Israeli soldiers. 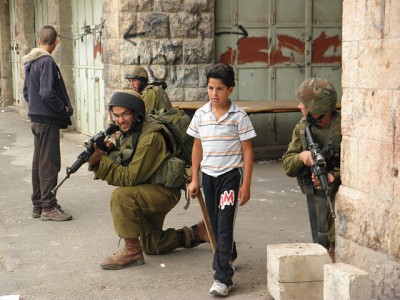 Movement around H2 is severely restricted.  In some streets Palestinians are allowed to walk but not drive, forcing them to manually lug heavy supplies such as gas canisters and food.  Even ambulances are not allowed to drive through certain areas.  Palestinians are forbidden from passing through some streets by car or by foot; the main street linking north and south Hebron has been closed to Palestinians; turning a 5 minute journey into a 45 min trek through alternative roads.

However, despite the enduring hardship in Tel Rumeida, resistance to the Israeli occupation remains strong.  The ‘Study and Challenge Centre’ is located on Palestinian land that is surrounded by four Israeli settlements – the closest of which is only metres from the rear of the building.  It faces south Hebron, overlooking steep, dusty terraces, planted with olive trees and cratered by old archaeological digs of excavated Roman artifacts.  The centre is a hub of nonviolent resistance and its existence is a testament to the spirit that exists in a beleaguered community under occupation.

The ‘Study and Challenge Centre’

The property that houses the centre used to belong to a Palestinian family who were forced to vacate the premises in 2004 by the Israeli authorities, who claimed that the owner’s Jerusalem identity prevented him from living in the area.  The Israeli military took over the property in 2004 and turned the house into a detention centre, fortified with barbed wire.

The campaign to reclaim the house began in 2006.  After local Palestinian activists had gained approval to rent the property from the lawful owner in Jerusalem, dozens of people, including local Palestinians and international activists, started to go to the house to re-occupy the land; maintaining a presence, removing the barbed wire and dismantling a military tent.  The large numbers of people attempting to reclaim the property forced the Israeli military into negotiating and, with the services of an Israeli lawyer, the activists took their claim to court.  After three months, an Israeli court ruled in favour of the protesters and the house was taken back by the Palestinians.

Palestinian control of the house remained perilous as the local Israeli settlers fought back.  Badia Dwaik, the 38-year old Deputy Director of Youth Against Settlements (YAS) explains; “The settlers went crazy, they started to attack the house and us physically.  Groups of 100-200 settlers came and made speeches full of lies”.  The activists arranged a 24-hour presence at the house to protect it from attack or seizure by settlers.  As Dwaik says, “It was tough and exhausting but we didn’t give up.  The home became safer although the settlers still attacked; they burnt a sofa, stole a laptop and broke the gate a couple of times.”

As the Palestinian activists consolidated their control over the house, they started to consider how best to use the property to serve the community.  It was agreed that it would become an educational centre for local people, run by volunteers.

The centre now trains people in Tel Rumeida to use photography and video cameras to record violence by settlers and the military, as well as documenting their daily lives under occupation.  As local activist Tamer Atrash says, “The camera is our weapon.”  The centre also offers English classes, painting, gardening workshops and shows films.

The property also functions as the base for the Palestinian nonviolent activist group, Youth Against Settlements (YAS).  Badia Dwaik is keen to stress the distinction that exists between the work done by the educational centre and activism by YAS, although both make use of the property.

YAS originated as a response to the repeated attacks by settlers on Palestinians in the area.  As Dwaik says; “The main problem here is the settlements.  They steal land and push us into a corner until we leave.  We had to target them in our work as they use settlements as an excuse to continue the occupation and control the population.  They divided the streets [in Hebron] and broke the social life with checkpoints and gates to protect settlers.”

In 1994 American-born Baruch Goldstein fired on Palestinians in Hebron’s Ibrahimi mosque whilst they prayed, killing 29 and injuring a further 200.  Atrash describes the massacre by Goldstein as a “turning point” in shaping the divided and fearful environment for Palestinians in Tel Rumeida today.  After the attack, the Israeli military closed many of the Palestinian shops in the area and divided the streets. Hebronis now divided into H1 (under Palestinian control) and H2 (in which an estimated 40,000 Palestinians, and 500 Israeli settlers, live under Israeli control).  As Atrash says,  “The victims were punished.”

Dwaik continues; “It is an apartheid situation – the electronic gates, the checkpoints, the security – all happened after the massacre.”  The Ibrahimi mosque now has separate spaces for Muslims and Jews; the Jewish section is the only synagogue in the world containing a Qu’ran.

YAS organize demonstrations against the checkpoints and the Israeli presence in the area.  They run a program hosting internationals, who stay with local families that live close to Israeli settlements, to show them the impacts of occupation in Tel Rumeida.  The group also organizes olive harvesting in the area, which is not just about economic necessity but is also a form of political defiance as settlers and the military attempt to disrupt Palestinian attempts to tend their own land.  Crucially, YAS stages events protesting against the closure ofShuhuda street, the principal thoroughfare and shopping district in the area.     .

Although YAS originated in Hebron, it now has groups and actions in Ramallah and Nablus.  Overall the YAS has around 70 members and attracts hundreds to its demonstrations and actions.  Dwaik says that older people are involved in the group’s activism, however they “focus on the youth as they have energy and they are the future.”  The organization says that they welcome activists from all Palestinian political parties.

YAS adopts a strictly nonviolent approach to its activities and provides training in nonviolent resistance.  “Nonviolence is more difficult to deal with than violence.  You have to control yourself, it is not easy.  We are already surrounded and occupied, it is not possible to carry guns.  Nonviolence is difficult and may take a long time but violence would create a violent community” said Dwaik.  Nonviolent tactics help to recruit Israeli and international peace activists to their cause and the strict adherence to nonviolent principles combats the Israeli narrative that Palestinians resisting occupation are ‘terrorists’.

Dwaik also points to several examples of successful nonviolent resistance in other countries such as Egypt, South Africa andSerbia- in which Otpor!, a nonviolent youth movement, played a significant role in the peaceful overthrow of Slobodan Milosevic’s regime in 2003.  YAS has established links with Otpor!, with the latter providing training to YAS activists in nonviolent resistance tactics.

Despite the work done by the educational centre and YAS, intimidation and harassment by the Israeli military and settlers continues.  Attempts to pick olives on Palestinian land in the area a few days ago were disrupted by the Israeli security forces, who detained a group of Palestinians, confiscated their identity cards and filmed them for around 20 minutes.  Soldiers pushed and shoved Palestinians and international observers and then unlawfully forced people who had been picking olives to leave the area.

On the same day, settlers walked onto the land and attempted to intimidate Palestinians as they picked olives.  Baruch Marzel, a prominent extremist Israeli settler, provoked outrage by standing on a Palestinian flag in the olive groves.  A recently painted-over Star of David and anti-Palestinian graffiti remains visible on the rear walls of the building and the property’s water supply was deliberately cut earlier.

However, Dwaik claims that the work done in reclaiming the house and the subsequent success of the educational centre and YAS has helped reinvigorate the once divided Palestinian community in Tel Rumeida – “Now we have created a life here”. Atrash continues;, “We want our rights, we will never give up and we don’t use violence.  We can prevent Israeli expansion in this way.  The house is a living example.”