Permission to enter their own lands: Kufr Qaddoum rampaged again by military

In the village of Kufr Qaddoum the people held a demonstration for the 17th Friday in a row. The demonstration started around 11:30 AM in the center of the village and consisted of approximately 80 people. The procession only made it to a barbed wire that blocked the road although it stood within the infamous “red line” that outlines Kufr Qaddoum and separates it from the nearby illegal settlement of Qadumim.

With border police and Israeli military present, the protesters were immediately fired at with tear gas. The soldiers directly targeted the protesters from a distance of approximately 50 meters. One young man was hit by a tear gas canister on his thigh by one of the very first shots before the protesters pulled back into the village. They soon returned and were again violently attacked with tear gas and rubber coated steel bullets by the Israeli army. 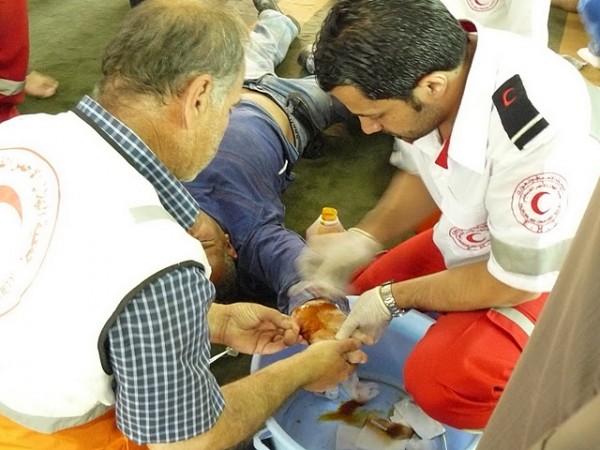 At around 12 PM the army passed their own barbed wire blockade and entered the village in military vehicles. Sound bombs and tear gas was fired in large amounts. Civilians who were not taking part in the demonstration were also affected, including one elderly woman who was seen falling over when running for her life outside the mosque in the middle of the village.

One ISM activist was nearly arrested during the military rampage on Kufr Qaddoum, but managed to escape from the soldier chasing him. Two Palestinian activists were injured and taken inside the mosque for treatment from the Red Crescent, and several people were seriously affected by tear gas inhalation.

The demonstration ended just before 1 PM when the army withdrew from the village. The soldiers  later announced in loud speakers that all villagers had to leave their lands and none were allowed to continue the olive harvest during the rest of Friday and Saturday, though the villagers have permission already from Israeli authorities to enter their lands on Friday and Saturday.Four days before the protest Israeli soldiers entered the village during the night and arrested nine people. They are all still being held.The weekly demonstrations in Kufr Qaddoum are arranged by the Popular Committee of Kufr Qaddoum and held in protest against the closure of the main road entering the village. The road was closed in 2003, and the case was taken to the Israeli High Court. After years of waiting the people were allowed access to the road. The court ruled that the villagers could not use the road until 2012 after Israeli claims of the road not being “suitable” or “safe.” The main road leads from Kufr Qaddoum out to the main road to Nablus and passes the nearby illegal settlement of Qadumim, which was established in 1976.