New
Home / Reports / Steadfastness and solidarity at the Rafah border

Steadfastness and solidarity at the Rafah border

Under pressure from the Egyptian army and the police, the International Movement to Open the Rafah Border ( IMORB), is maintaining their camp at the Rafah Border. The group is growing; now 26 people from France, USA, Germany, Egypt, Belgium, and Sweden.

Yesterday, our Italian friend left us for his job in Italy, but a German woman, Alona, married to a Palestinian from Rafah, joined us with her six children, aged 2 to 12. She wants to return to live with her husband and other three children in Gaza. After Egyptian authorities denied her entrance, she said, “I am coming from Germany and I don’t wish to go back to sleep in El Arish. I come here and I only want one thing: to go to Gaza.” By phone, her husband asked his family to join the IMORB camp.

This morning we were joined by a Palestinian refugee, Mohammad, a PFLP (Palestinian Front for Liberation of Palestine) activist who spent 24 years in Israeli prison and has been living in Belgium. Mohammad’s daughter, a diabetic student in Gaza, is now in need of insulin. “Since June 8, the Egyptian authority has denied my exodus from Egypt. I heard about your camp and I decided to come and stay with you. The rumor says the border will be open Wednesday [6/17] so I will stay and wait.”

Since we set up camp two days ago (6/13) Egyptian police and intelligence agents have been visiting us periodically. Each night Colonel Mohammad speaks to us, but allows us to stay, after first threatening to expel us by force.

When he came to us last night he showed more tolerance and ordered the toilets, adjoining the cafeteria, opened, which had been closed by General Khalil Harb to pressure us to leave.

This morning policemen came and asked us to put down the tents. We explained that we need the tents for the children to take their naps later. They pressured us no more on this issue.

After yesterday morning’s visit, General Harb, came after midnight and said, “this is a closed military zone, and your presence here is unacceptable. We will use any means necessary to remove you.”

In spite of all this pressure, the IMORB persists. They stated, “we will leave only when the border will be opened.”

Our presence is reinforced by support from the Egyptian population, some of whom have brought us blankets, mattresses and other supplies. This morning an unknown man brought us fresh bread. Then a child brought some fooul, a traditional breakfast meal, that was most delicious.

Yesterday evening a policeman came to us wearing a Palestinian kifeyeh around his neck and offered us some chai.

All these demonstrations of support help us to persist in spite of the precarious situation, what Alona calls a “five star hotel.” 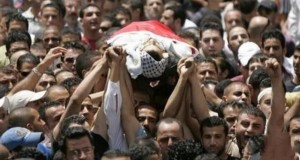