New
Home / Features / On the 71st week of the Great March of Return, the world forgets while Gazans remember 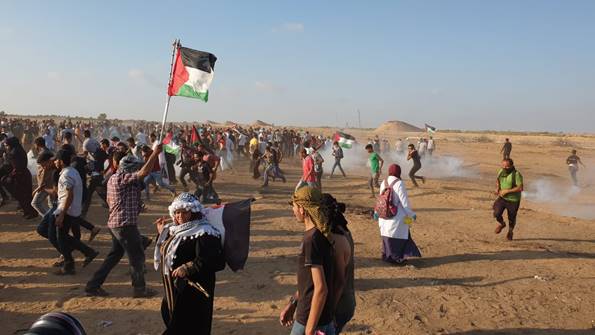 Eleven consecutive weeks of protests in Hong Kong have captured the focus of online commentators, heads of state, and global media. In France, 39 weeks of protests by the Yellow Vests movement continues to garner widespread interest. In the US, Occupy Wall Street is now an international household name after occupying Zuccotti Park for 9 straight weeks.

Last Friday marked the 71st week of the Great March of Return protests in Gaza, a staggering 1 year and 4 months of weekly demonstrations that have become largely forgotten in the amnesic world of headlines and social media. 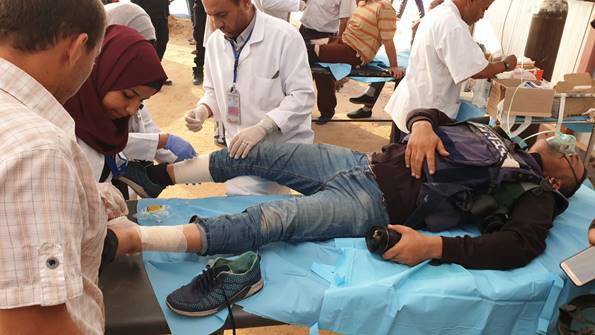 Journalist is treated for bullet wounds after being shot by Israeli soldiers at the Great March of Return. Pic: Palestinian Centre for Human Rights

The Israeli Military justify their actions by claiming they are responding to protesters throwing stones, Molotov cocktails, and flying burning kites and balloons.

Since the start of the Great March of Return protests, on March 30th, 2018, the Palestinian Center for Human Rights has documented 208 Palestinian deaths by Israeli forces, including 44 children, 4 paramedics, and 2 journalists. Another 13,629 were injured, including 196 who now suffer from serious disabilities ranging from amputations, paralysis, permanent loss of sight and hearing, and other disabilities. 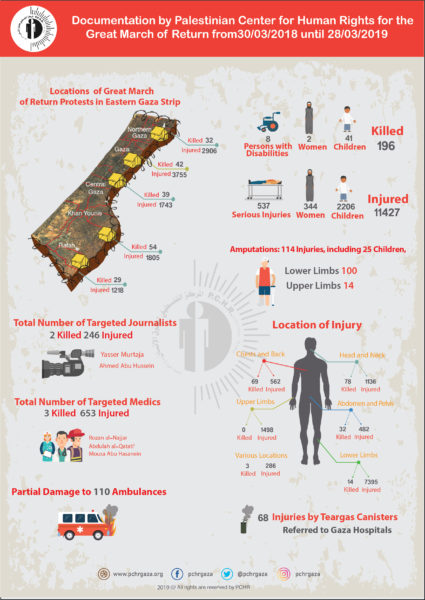 The death toll and number of injuries after one year of protests in the Gaza strip. Pic: Palestinian Centre for Human Rights

One might ask, in light of the brutal violence and tremendous human cost, why Gazans continue to protest every Friday, knowing the risk to their health and lives?

Maybe because Gazans don’t have the luxury of not protesting, of being able to quit and return to their “daily lives”. Maybe because while we, in the comfort and security of our homes, can choose whether or not to open a news story about protests in Gaza, Gazans must face a devastating reality; according to the United Nations Office for the Coordination of Humanitarian Affairs, 90% of Gaza’s water is undrinkable.

The rest is projected to become undrinkable due to pollution and lack of sewage treatment by 2020, at which point Gaza may become “unlivable”. Gazans receive on average of only 10 hours of electricity a day. Unemployment stands at 47% (65% amoung youth). While 75% of Gazans rely on international aid, mostly food aid, 35% of Gaza’s farmland and 85% of its fishing waters are inaccessible due to Israeli military policies. Hospitals are massively overstretched and under supplied, with one third of medicines deemed essential by the UN unavailable. 85% of schools in Gaza are running on double shifts, meaning students can only have 4 hours of classes a day. 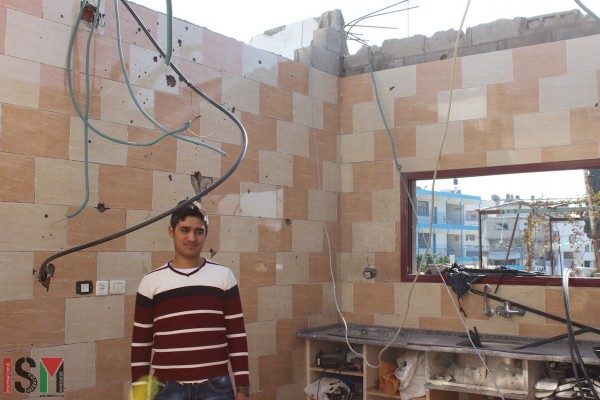 All of these realities on the ground have been confirmed by United Nations reports, in addition to UN Security Counsel Resolution 1860 (2009), which calls for the lifting of the blockade on Gaza. Yet the international community has thus far failed to act on the resolution, or make any concrete actions to push for its enforcement, leaving Gazans no choice but to try to call attention to their plight in any way they can, regardless of the cost.

The casualties of last Friday’s Great March of Return protesters failed to capture the world’s attention. It wasn’t reported in CNN, BBC or Al Jazeera; it didn’t make news in the Times, Reuters, or RT. Perhaps, if we as individuals listened to what Gazans have been trying to say for the past 71 weeks, the international community would be forced to respond. Perhaps, if the protests in Gaza elicited the same attention as the protests in developed nations, governments around the world would take notice and maybe even take action.

Perhaps, if we stopped forgetting the people of Gaza, they would not have to put their bodies and lives on the line to make us remember.